Frugal Foodie on a British Pound: An Orphan Crop 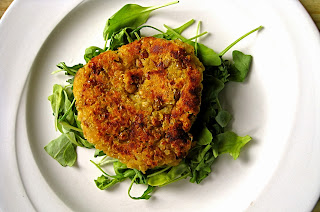 Quinoa has been the talk of the town for a few years now. It's the vegetarian superfood - a powerhouse of protein and micronutrients, all the while gluten-free. That may be true, but it's not the be-all and end-all of grain-like substances. In fact, during my first brush with the Live Below the Line Challenge, I honed in on millet as a very inexpensive, nutritious, and satisfying staple. However, millet is likely more of an "orphan crop" than its more well-known counterpart, quinoa. Orphan crops are those that generally lack institutional funding in research and development for improving the yield and production practices of crop varieties, or building strong connections with markets and trade.

Millets, another group of small-seeded grasses, is most widely consumed by humans and livestock in developing countries, where 97% of the production takes place. And although the centre of origin for millets is likely situated in Africa, it has been cultivated as a staple in East Asia for the past 10,000 years. What makes millet so enticing, is its ability to grow in poor and infertile soils, and under drought conditions. More recent research programs are exploring the diversity within millet that could help boost nutrition while also weathering some of these impending shifts in growing environment. Though finger and pearled millets are the most common around the world, Proso millet is cultivated in the United States and is likely the variety you will find on your grocery shelves. 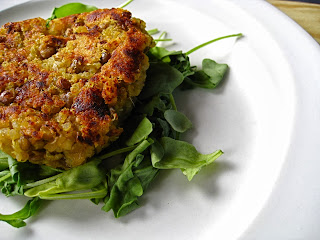 1.  Heat 1 tsp of oil in a skillet on medium-high heat. Sautee onions for about 3-5 minutes, until beginning to become translucent, then add in garlic. Pour in 1/2 cup of water and bring to a boil. Add lentils and cook for 15-20 minutes until lentils are soft.
2. Remove skin from sweet potato. In a bowl, mash the potato flesh and lentil mix until pretty smooth. Add in cooked quinoa, curry, and salt and combine until even.
3. Heat remaining oil in a skillet over medium-high heat. Form balls (about 3), flatten, and then place onto skillet when oil is hot. Cook until one side is brown, then flip, for about five minutes on each side.
4. Serve over a bed of greens and enjoy!

See also my Millet and Mung Beans. Check out more scrumptious vegan and gluten-free delights on this Wellness Weekend!
Posted by Rachel at 5:23 AM