Fifty Second Friday: An Apple (or Three) a Day... 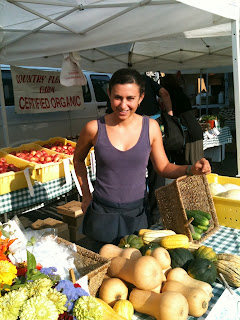 As Sunday morning dawned, it was only natural that the first thought on my mind was of farmers markets. Nearly every Sunday from fall 2010 had seen me, bright and early, at the Dupont Circle Farmers Market. This time of year, the weather would just begin to turn crisp, and the apple varieties at our stand would start to grow incrementally. Golden Russetts, Black Twiggs, and Spartans, although not found in a typical grocery store, became common vernacular.

But now, as I find myself thrown into a new farmers market context, the apple array has shifted beyond familiarity. So Sunday morning, not quite so early, I traipsed up to Summertown for a peek at the local offerings. And lo-and-behold, Cross Lanes Fruit Farm with a spread of heirloom apple varieties, albeit ones I had never before set eyes on (they will have Pippins, Galas, and Spartans soon, though). I bought three to give them a try. 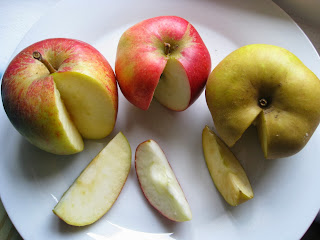 Ellison Orange (far left) is from the Pippin geneology, and was introduced around 1890. It is a classic English apple variety, that graces farm stands mid-season, and has anise seed undertones. Not my cup of tea. The Worcester Pearmain (center) also arose in the late 19th century (c.1870), but the season is short-lived. While the quality of flavor and texture are very much dependent on the weather conditions during growing season, this little beauty has a distinctly strawberry flavor. Finally, we come to the St. Edmund's Russet (another Pippin, far right). In my humble opinion, this apple took the cake this time around, reminiscent of my favourite russet varieties we sold in the States (e.g. Ashmead's Kernel). A nice crisp, slightly tart apple, it feels a bit like home.