"We will respond to the threat of climate change, knowing that the failure to do so would betray our children and future generations" - Barack Obama, 21 January 2013 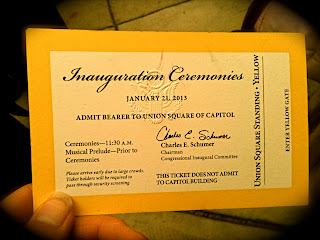 Yes we can...finally broach the topic of climate change in the United States. Which is great, because we need to take some serious action to avoid some serious consequences. As I stood shivering on The Mall this past Monday, an involuntary cheer escaped my lips as the words 'climate change' reverberated over the sound system. Did this mean our country could finally take steps to climate legislation? Could we make commitments and be the leader so desperately wanting on the international stage?

Well all of that remains unclear. However, one thing is for certain: we need action, and we need it now. And the longer we wait, the more it will cost! One could make many arguments for why we need to address climate change. Heat waves and insect-bourne illnesses post health concerns as they are expected to worsen. A new greener economy, based around renewable fuels and energy efficiency could create jobs and make the country more competitive on the global scene. But ultimately, neglecting to deal with climate change affects the very foundation of human civilizations - our ability to produce food.
So what's the big deal, what are the big factors that could undermine our agricultural system? 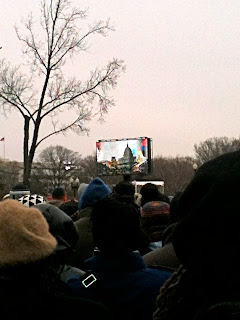 1. Temperature - I like hot weather. Yet at some point enough is enough. Plants are the same way (as are livestock...). It's not surprising then that at certain temperatures crop yields start to fall. Research is starting to better dilineate how heat causes losses, but at the end of the day hotter temperatures mean less food. Some places will benefit from rising temperatures. Greenland and the northern parts of Canada could provide new fertile ground and long growing seasons. Hopefully, there won't be a mass migration anytime soon...

2. Water - plants and people alike need it. But drier places are expected to get drier, making it increasingly difficult to cultivate the land. It doesn't help that we tend to grow the majority of grains, vegetables, and fruit in semi-arid regions of the country. California's Central Valley and the Midwest's Cornbelt are both heavily irrigated and experienced drought conditions this past summer. What's more, the overuse of water for crops has led to a depletion of groundwater to disturbingly, and perhaps unrecoverably, low levels.
3. Storms - extreme weather and disaster events are expected to become more frequent as the climate changes. We got a taste for the potential impacts during hurricane Sandy, with coastal communities completely destroyed and severe damage due to flooding and winds. Those storms - cyclones in the Midwest, hurricanes on the coast, flooding in the lowlands - can easily wipe out an entire season of crops in one fell-swoop.
The US Global Climate Change Research Program just released their quadrennial assessment for public comment. Take a look at the chapter on agriculture for details on the above!
"Some may still deny the overwhelming judgment of science, but none can avoid the devastating impact of raging fires, and crippling drought, and more powerful storms. The path towards sustainable energy sources will be long and sometimes difficult. But America cannot resist this transition; we must lead it.” With four years ahead for an Obama second term, only time will tell if these words hold water: if we start to do our part in the international climate scene; if we start to take seriously the implications of a changing climate on all aspects of human existence. Will we actually make change? Yes. We. Can!

Stepping off my soapbox. Happy freezing cold Wednesday in DC!
Posted by Rachel at 6:00 AM