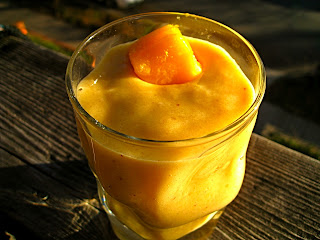 It may be cold in Washington, DC (global warming, what?), but that doesn't mean we can't celebrate a little on Friday. Generally I'm opposed to relying heavily on tropical fruits, subsisting off of apples and oranges (which are seasonal and just south in Florida...) during the winter months. However, I happen to be a tad bit obsessed with frozen mango. And though it may seem a bit counter-intuitive during this time of year, my day just doesn't seem right without a morning smoothie.

Feeling inspired by Indian cuisine after a delightful meal at Rasika, the logical direction for the morning beverage was a mango lassi. Lassi dates back to ancient times, in theory aids digestion, and was used in Hindu rituals. While the traditional Punjabi 'lassi' is actually a savory beverage of yogurt, water, salt, and spices, the sweet almost milkshake-like drinks have become popular and proliferated. Enter the mango lassi. I veered away from the basic recipe (and veganized it) by adding in some greens and frozen fresh ginger (and some raw vegan protein powder...). Completely optional, but thoroughly enjoyable. 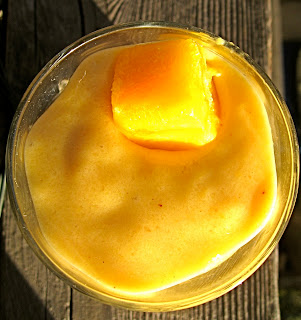 Pretty self-explanatory: dump everything in a blender (or go the immersion blender route) and mix until creamy smooth.

Oooh, sounds so refreshing! I just found you through Wellness Weekends. Would you like to share this at Raw Foods Thursdays? http://www.glutenfreecat.com/2013/01/raw-foods-thursdays-13113/