Produce of the Week: Miner’s Lettuce

I want to start out by apologizing for leading you astray with last week's produce. While the basil in my backyard is technically local and seasonal, after the cold snap last week it is now pockmarked in brownish spots and curling in on itself. For those of you in the northern regions of the United States, basil is just not in the stars this early in the year. Sorry.

Ok, moving on to something readily available right now. Also known as Winter Purselane and Spring Beauty, Miner’s Lettuce is a native of the Western United States, from the southern bit of Alaska down to Central America. Most common in the early spring (that's now), the tender plant loves cool, damp climates (that's Seattle). In fact, it seems to like the Pacific Northwest so much, that the little lettuce is making an appearance at every produce stand at the Saturday farmers market!

Salads appear to be the most common use of this green. Let's start there. It just so happened that this weekend I gave my little arugula patch a trim, so I had a lovely salad of purselane, arugula seedlings, and sunflower-lemon dressing. 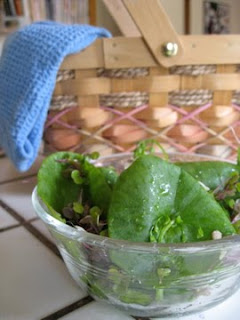 Blend together at a low speed. 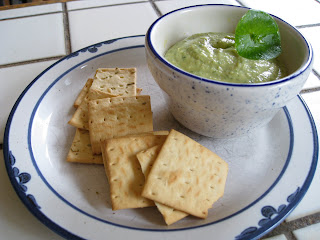 Miner’s Lettuce Hummus (based on Spinach and Artichoke Hummus):

2 cups chickpeas (or one can rinsed and mostly drained)

2 tbs flaxseed oil (has a strong flavor, so use olive oil if you'd prefer)

salt and pepper to taste

Food process until smooth and greenish throughout. 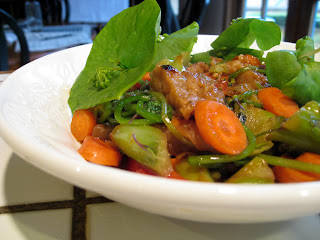 Late Spring Stirfry (Adapted from The Farm to Table Cookbook by Ivy Manning):

1. Mix all ingredients together except vegetables and starch. Marinate the seitan in the mixture while cooking the veggies.

2. Stir-fry up the veggies (add water as needed). Add the seitan to the frying pan. After they have browned a bit, add the marinade mixed with the starch.

3. Cook a bit more and serve by itself or over rice or quinoa.

So that's all. Some day, maybe I will go mine for my own lettuce (it's actually called that because men ate it during the gold rush to get vitamin C and fend off scurvy...or something like that). For now, this is another Produce of the Week brought to you on My Munchable Musings!

Email ThisBlogThis!Share to TwitterShare to FacebookShare to Pinterest
Labels: chickpeas, Produce of the Week, salad, Vegan

I bought a big basil plant at Trader Joe's and it's totally brown and wilty. Boo!

The miner's lettuce looks interesting. I've never heard of it before. I'll have to look for it. Farmer's market season is coming!