Chocolate: How it Can Help (and Harm) People and the Planet

Cacao pods are colorful fruit...truly tropical!
I think you have gathered by now that I love chocolate. As such, I am always looking for reasons to justify my consumption of cacao products. My excuse for yesterday and today's chocolate shenanigans is the 40th anniversary of Earth Day! Wednesday evening found me walking the factory floor at Theo Chocolate, while last night I hung around with one of the founders of Madecasse.
Unfortunately, chocolate happens to have a split personality, a little Dr. Jekyll and Mr. Hyde going on. It can wreak havoc on ecosystems and developing nations' poor farmers, while at the same times has the potential to preserve certain habitats and support local economies. Like most social/environmental dilemmas these days, it really depends on how you do it!
The Issues:
Greenhouse Gas Emissions
No matter what, if you want chocolate, it will have to travel from somewhere within the Tropics (15-20 degree bubble around the equator). Many chocolate manufacturers actually purchase chocolate from a large-scale distributor and then create their bars. This, of course, means an additional voyage from farm to processor to chocolatier. Producers that see their chocolate from start to and end product, are termed bean-to-bar manufacturers, but this isn't necessarily an indication of sustainability. Transportation isn't the only GHG culprit in chocolate making, though. The method of growing a cacao pod is actually critically important in chocolate's carbon footprint, but also in its impact on the surrounding ecosystems.
Habitat Destruction
Originally a tropical understory plant hailing from Latin America, cacao has now spread throughout the tropics and is for the most part grown like other plantation comodity crops. That means cutting own a forest (and releasing GHGs into the atmosphere) and planting a mono-crop of cacao. Some chocolate companies are now promoting their "shade-grown" chocolate, that capitalizes on traditional methods of growing cacao, while at the same time preserving canopy habitat for birds and arboreal creatures.
Soil Degradation
Similarly to coffee, cacao experiences initial growth spurts when grown in mono-cultures exposed to full sun. That does not last for long, though, because the soil rapidly degrades, losing nutrients and moisture. The crazy thing about tropical rainforests, is that their soils are extraordinarily poor, and most of the nutrients are locked up the vegetation. So, when you undermine the system in which these forests evolved, you end up with shorter-lived plants and an increasing need for added water and chemicals. Africa, which produces 2/3 of the world's cocoa, is currently experiencing this decline in yields.
Child Labor
43% of cocoa comes from Africa's Cote d'Ivoire, in which forced child labor is mainstream. Fair-trade certification prohibits the use of child labor...although, I think that allowing children to learn the trade by experience (much like small-holder farmers in the US years ago), has some merits - carries on tradition and local knowledge.
Unfair Wages
One of the biggest problems in human terms with commodity crops is the impoverished state many farmers find themselves in. Between large conglomerates and middlemen in the production line, very little of the actualized cost of a chocolate bar makes its way back to the farmer. A growing awareness of this inequity and increasing concern of consumers has lead to more efforts to work closely with growers, through partnerships, collectives, and cooperatives. To a large extent this is "fair trade."
So now I feel justified in spending Earth Day eve and the evening of Earth Day tasting, really tasting, chocolate with a mission. The livelihoods of about 50 million people in the world depend on cacao. For that reason, chocolate is probably not going away. But if we make more thoughtful decisions about what type of chocolate we buy, we can support more equitable ventures for the people involved and more sustainable growing systems for the planet! 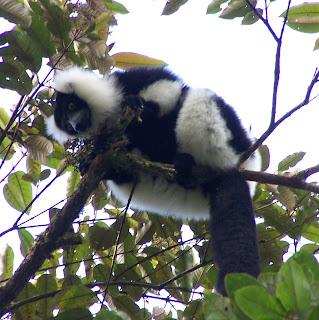 Ok, so Black and White Ruffed lemurs don't live in the cacao-growing region of Madagascar, but they are the reason I love the island and feel so strongly about preserving diminishing forest.
Look for other brands like Theo and Madecasse. Both hold a special place in my heart for sourcing from Madagascar and supporting the extremely poor farmers and the dwindling endangered rainforests. I think I might go nibble on a bar of Fair Trade Organic dark chocolate (70% or bust), now with a little less guilt (and it's healthy - even less guilt).
Chocolate Resources:
1. The Nibble: High cocoa content bars and some possible health benefits
2. NPR: How Chocolate Can Change the Planet
3. CNN: Chocolate's Bitter Sweet Relationship with the Rainforest
4. Transfair: Fair Trade Certification
5. Chocopedia
6. Choco Guatemaya: A cool chocolate non-profit
7. The Nibble: Origin and Taste
Posted by Rachel at 3:05 PM

Love chocolate.
Very interesting about it's effect on environment.

There's a recent study out showing great benefits with 7.5 grams of chocolate.
http://abcnews.go.com/Health/HeartDiseaseNews/chocolate-boasts-blood-pressure-benefits/story?id=10243200http://abcnews.go.com/Health/HeartDiseaseNews/chocolate-boasts-blood-pressure-benefits/story?id=10243200