Eating for the Planet

“By eating meat we share the responsibility of climate change, the destruction of our forests, and the poisoning of our air and water. The simple act of becoming a vegetarian will make a difference in the health of our planet.”
Thich Nhat Hanh, The World We Have: A Buddhist Approach to Peace and Ecology 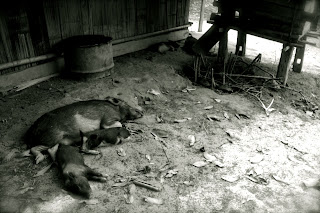 Abstaining from eating animal products has long been the domain of animal rights activists, hippies, and tree-huggers (at least in Western cultures). In academic circles, ethicists and philosophers have mused for decades about the moral implications of consuming meat, but not so much the scientists. Yet, these days it seems like studies connecting diet, health, and climate change are all the rage, building up an evidence base of why a meat-free diet is a key strategy for the planet and us.

A few University of Oxford researchers published a paper this year in the Proceedings of the National Academy of Science (for those who don't know, is a well-regarded and widely-read publication), which shows on a global scale that the less meat consumed, the greater the greenhouse gas emissions reductions and the more health benefits. It was a win-win-win scenario: food-related emissions would decrease by more than 60%, fewer people would die 'prematurely', and the world would save up to $31 trillion otherwise lost to healthcare, environmental restoration, and missed work hours ... we just (all 7.4 billion of us) have to shift to an entirely vegetarian diet. No biggie. 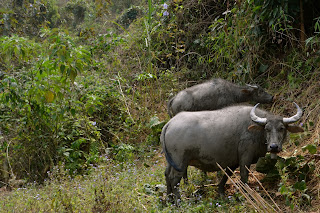 A Nature Communications piece (a more main-stream 'pop-science' journal), which came out about a month ago, suggested that only plant-based diets are compatible with wide-spread re-forestation. This is both due to the sheer quantity of meat people consume (read: alot) and what we feed livestock (largely soy and maize). So vast swaths of forests are destroyed to grow grain to feed to animals. Let's just say it's not very efficient.

Finally, this month a group of researchers at the World Resources Institute (awesome think tank based in DC) pubished the 11th in a series of the "Creating a Sustainable Food Future" brief series. They provide some nifty graphics comparing the environmental impacts of different protein sources, and then go on to model some scenarios of different diets (both for the world and the US). The takeaway? Animal protein uses a lot of resources, and the average American eats more than his fair share. If you're curious about how feasible they thinking shifting the American diet away from meat is, there are even more colourful pie charts that detail how. 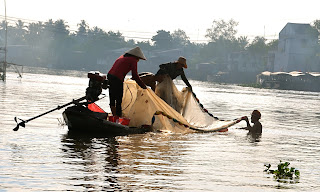 You're probably thinking, 'Ok ok, enough already, get off your vegan high-horse'. But, let me just say that I'm under no illusions that the world is going to give up meat tomorrow. Nor do I honestly believe everyone should (and if you want to know my thoughts, peruse this earlier post and this one). In fact, after traveling around Southeast Asia for a month, I feel even less convinced that people would willingly give up meat, fish, dairy, and eggs. It was actually a bit surprising, as I thought predominantly Buddhist countries would at least limit consumption (apparently that's not how it works...). Fish sauce was nearly impossible to avoid anywhere but explicitly vegetarian restaurants, and other animal proteins dominated the main courses. 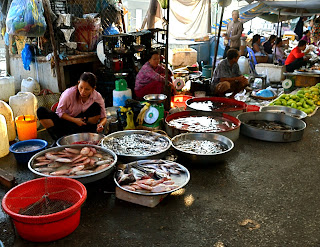 At the same time, the proportion of meat to grain was usually pretty small. People are still living on very little, and meat is expensive. Following periods of food scarcity in the not-so-distant past, effort went into planting hectares of rice fields rather than prepare pasture. Sure, water buffalo graze on hillsides, and pigs and chickens roam rural villages, but it's not on the same scale as most industrialized nations (and increasingly China...yup, that's also a favourite of academics). So while I agree that diets around the world have been moving in an unsustainable and unhealthy direction for quite a while, it is important to remember in these broad global studies that the more local contexts matter a lot. The WRI report does mention poverty implications, and there are definitely people out there looking at regionally-specific 'sustainable diets'. But it is still a good thing to keep in mind when reading these broad-brush studies.

Well that's all for now. Happy Earth Day! With the theme of Trees for the Earth, it seems only right to focus on a driver of deforestation, no?

"My own view is that being a vegetarian or vegan is not an end in itself, but a means towards reducing both human and animal suffering and leaving a habitable planet to future generations."
Peter Singer