Are you reveling in the warm, spring-like weather that has been occupying the Eastern United States? Yes, it was in fact nearly 70F and sunny today here in Washington, DC. And while it may be all sunshine and flowers right now, that could bear ill tidings for the coming seasons. A few years back, I mulled over the implications of an unusually dry, warm winter in Seattle. One of the worries that surfaced was that the temperatures were too warm for snow to accumulate in the mountains, which then feeds rivers and streams as it melts in the spring and summer. Reduced snow pack means less water when we really need it. 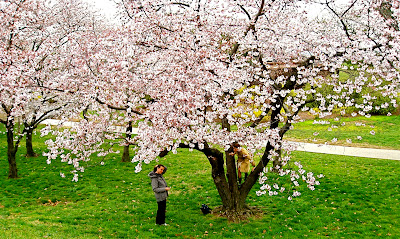 That's part of the story, although it is more of an issue in the West, where water supply is so tied to the amount of snow in the mountains (probably not completely unlinked to the fact that the West has mountains). On the Atlantic coast, we tend to get short, heavy precipitation events. While above-freezing temperatures may seem glorious, it means that we get rain instead of snow...rain that does not remain on the ground, but runs off almost immediately into waterways, carrying sediment and pollutants.

One Maryland farmer I spoke with this past weekend voiced concern about this phenomenon. Snow on the ground serves several purposes - 1) it insulates the ground for any overwintering crops; 2) it protects the soil from dessication and degradation, keeping moisture and topsoil where it is; and 3) it allows for the water to seep into the soil and recharge groundwater, rather than skipping town in a hurry.

So while you may be enjoying a bit of 'good' weather, consider this - will new buds still arrive in the spring? Will we face a serious drought from lack of winter snow? How will the crops fare? Where are we all going to get our skiing in????
Posted by Rachel at 7:00 AM