The Sinister Side of an Early Spring 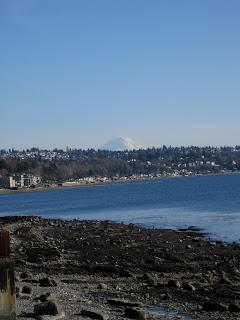 Mountain Rainier from a West Seattle beach on a clear March day!
I have to admit that I am quite enjoying the mild, almost spring-like weather that has comprised this year's Pacific Northwest winter. It has been nice spending quality time with the out-of-doors and frolicking in the sunshine. In fact, I almost feel lucky to be unemployed and "stuck" at home in Seattle.
Under this facade of cheery blue skies, though, a darker side to this story exists. In my experience growing up in Western Washington, the months between Thanksgiving and St. Patrick's Day (and some times well into May) tend to be full of overcast skies, a constant drizzle of precipitation, and temperatures only marginally above freezing - so that we rarely experience snowfall in the low elevations, but still must bundle up. This year has been very different, more along the lines of the SF Bay Area winters I had enjoyed for the past five years.
In fact, according to the Western Regional Climate Center, for the past six months minimum and maximum temperatures have exceeded the average and in the past three months rainfall has fallen short of its average. But, hey, why am I complaining?
Well, in spite of prevailing notions that Seattle sees naught but rain 365 days a year, we actually experience rather dry post-Independence-Day summers. Washington State depends largely on snowpack to feed our rivers and reservoirs in the spring and summer. Warmer and drier winters lead to less buildup of snow in the Cascades and subsequently threaten water supplies in the ensuing months. In fact, snowpack has range from 54-87% of normal for the year - does not bode well for this year's Fourth of July fireworks!
But this isn't just summer drought prohibiting fireworks; seasonal variations in stream flow affect the dams that that pervade the State's tributaries. Hydropower from these dams constitutes 72% of our electricity production! Ok, so no air conditioning this summer ... but also less water for irrigation, as stream flows decline and groundwater tables drop. Eeks.
What about the animals? Well, the iconic Pacific Northwest salmon will not fare too well with reduced flows impacting upstream migration. Plus, warmer water temperatures wreak havoc with these cold-water fishes, plus alter the stream habitats themselves. Warmer temperatures also influence other migratory patterns, like those of birds. According to the Institute for Bird Populations, while tropical species may be enjoying the weather changes, temperate species may suffer decreased reproductive success (thought to be linked to the changes in food supply).
So there you have it. I may have been exulting in the lovely weather, but as we have just seen, it is NOT all sunshine and roses. If you are a gardener, take advantage of the warmth now, because who knows what the spring and summer will hold! 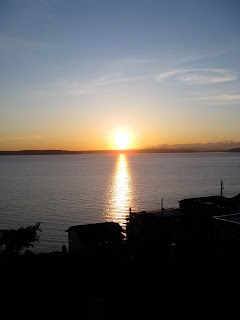 As the sun sets over the Puget Sound, we will just have to wait and see what the future holds...
Other Resources:
UW Climate Impacts Group
Office of the Washington State Climatologist (how awesome is that?)
WA State Department of Ecology
Posted by Rachel at 11:59 AM