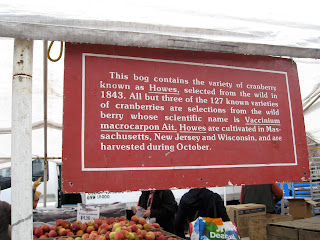 As you know, I spent last week in New York. On Wednesday afternoon I stumbled across a farmers market in Union Square. Now I rarely say no to a turn around a farmers market, but little did I know what I would find...fresh cranberries!

Why is this surprising? Well, cranberries, for all they are a holiday favorite, are actually quite particular about where and how they grow. The necessary conditions are found in the northern reaches of the U.S. - primarily Wisconsin, New Jersey, Massachusetts, Washington, and Oregon. Cultivated in bogs and wetlands, cranberries require sandy soils and plenty of fresh water.

Although cranberries don't have quite the history of some of the other produce items I've discussed in the past, they are distinctly North American. Native Americans have utilized the fruit since the mid-16th century, and taught European settlers during the 17th century. The berry had many uses, from fighting scurvy to serving as a dye. I took home the Howe, one of the early varieties dating back to 1843, and cultivated largely in Massachusetts.

Many of the cranberry bogs are upwards of 100 years old, but there are still environmental concerns associated with the crop production. There is concern over loss of wetlands due to cranberry expansion, in addition to water pollution from the use of fertilizers and pesticides in the growing environment. And despite the fact that cranberries are a native wetland plant and will perform some of the filtering and drainage functions of wetland plants, the replacement of native wetlands with a monoculture crop presents serious challenges for proper wetland function. So when choosing your cranberries, make a point to buy organic and if possible, ask your farmer about his/her land and management practices. (mine were brought to the market by Breezy Hill Orchard from fourth generation Willow Cranberries, which practices IPM).

Now, what did I do with my berry-licious find? In celebration of the final days of Hanukkah, I created a twist on a classic dish:

1. Combine all ingredients in a bowl. Form patties and squeeze out any liquid.
2. In a well-oiled skillet, heat patties on medium-high heat, flipping after one side is browned and crispy.
3. Once both sides are golden, place on a paper towel on a plate. Can also place on a cookie sheet and leave in a warm oven. Serve warm.

1. Heat apple and water over medium heat until soft. Mash apple. Add cranberries and rest of ingredients.
2. Cook until cranberries start to melt and sauce thickens.
3. Serve warm over latkes!

Grist recently posted another rendition of Cranberry Sauce (and some cultural history) for your reference.

This recipe is included on Wellness Weekend at Diet, Desserts and Dogs. Also, check out this fun savory cranberry recipe on Choosing Raw.
Posted by Rachel at 6:00 AM