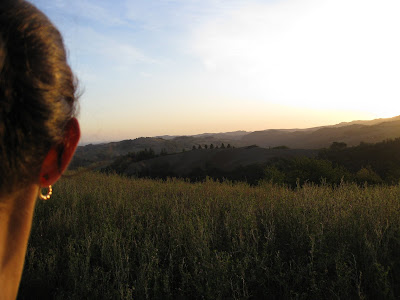 Note - photo is NOT from Portland...

First off, greetings from Portland, OR and the first ever Vida Vegan Conference! After two full days of munching and musing , I am left with a lot to think about and a whole new perspective on the vegan community.

One of the panels I yesterday was on nutrition. While very interesting, the panel raised an issue with which I still feel torn. Organic is always better. As you may recall, I have written about organic production in the past - particularly with regards to berries and compared to conventional. So, obviously I don't disagree with the merits of choosing organic, but rather the principle that one can blindly put faith in an organic product. Depending on your values and goals, it is not always better.

As with most things in life, there are two sides to the coin. A Grist article from about a month ago, in response to a separate Scientific American blog post provides some serious insight on this issue. The selling points: GMOs are not allowed, dangerous chemicals are banned and generally it is more energy efficient. But sadly, in the world in which we live, even organic agriculture is not all sunshine and roses. Industrial scale production does employ approved pesticides, monocropping, and heavy machinery for tilling the soil, etc. There is debate over nutritional benefits, though I fall into the camp that organic-done-right is superior in micronutrients.

So, while I support organic in theory, in practice I think a blanket acceptance is too simplistic. I would rather support a local farmer, who may not be certified organic but makes thoughtful decisions about the use of chemicals, than a nameless organic agriculture giant with whom I have no connection and no established relationship. Get to know your farmer, find out if he/she strives to a more agro-ecological approach that aligns with the services nature provides us, and support those who do at the market or through a CSA.

What are your thoughts on organic? Is that what you tend to purchase?
Posted by Rachel at 1:30 AM

Email ThisBlogThis!Share to TwitterShare to FacebookShare to Pinterest
Labels: organic

hi Rachel!
It was so super great to meet you at VVC! I didn't get to go to the nutrition panel, but I agree that the organic issue can be sticky. here in Santa Cruz I can pretty much always get what I need locally AND organic, which is obviously rad. Some local farmers aren't organic, but also don't use crazy pesticides and such... and I feel fine about that. Other times I'll still choose local over organic, but I do try to be mindful of those certain crops that are supposedly really important to buy organic, and sometimes I end up buying those things as imported goods at the grocery store. Still, I try pretty hard to keep that to a minimum. Usually what's local will just have to be good enough! :)