Produce of the Week: Spinach 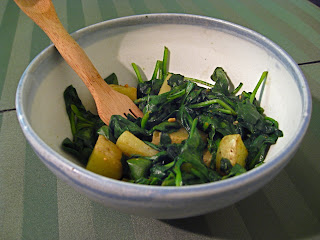 It's winter. That means two things: I'm freezing a good portion of the time, and very little is still growing. This time of year, I normally subsist off of storable produce, like root veggies, winter squash, and cabbage. But my roomie left some organic spinach in the fridge, so let's talk about this little leafy green this week.
A native of southwestern Asia, this member of the amaranth family has become a staple salad green in the States. With ancient origins in Persia, spinach then migrated to India, Nepal, and China. In the early 9th century, spinach made its way to Sicily and proceeded to be quite popular in the Arab Mediterranean, and finally mid-15th century a delicacy in Europe.

Spinach is also a super-food - high in iron, calcium, and a bunch of other micronutrients I've never heard of. Granted, conventionally-grown spinach is a hotbed for pesticide residues. And it found itself at the heart of scandal in 2006 with an E. coli outbreak and 2007 in a salmonella scare. Still, spinach has got it going on! It is full of antioxidants and quite versatile in the kitchen. I decided to take it on an Indian spin for dinner.
Curry Aloo Saag
1 small potato (diced)
2 cups chopped fresh spinach
1/2 tsp mustard seeds
1/2 tsp fenugreek
1/2 tsp curry powder (more to taste)
salt to taste
spritz of olive oil
1. Heat a skillet with olive oil and pan fry potatoes until tender (can also prebake in oven). Add mustard seeds about halfway through.
2. When mustard seeds start to 'pop', add spinach and fenugreek. As spinach wilts, add salt and curry powder. Cook until spinach is wilted to desired level and potatoes fully cooked.
What else can you do with spinach?
Try a hearty Indian palak dal to get you through the winter cold.
Another beans and greens recipe with spinach and chickpeas.
Ricki of Diet, Desserts, and Dogs has an awesome recipe for a "meaty" lasagna.
Her May SOS Kitchen Challenge also revolved around spinach, so check out all those recipes.
This baked spinach and pasta with roasted garlic sauce looks amazing.
I've been wanting to make this spinach and artichoke hummus forever.
In the summer and early fall, try out spinach and zucchini soup.
Check out my spinachy baked goods from last spring!
Well, that's all folks. Eat spinach, stay healthy, keep warm.
Posted by Rachel at 8:31 PM

Email ThisBlogThis!Share to TwitterShare to FacebookShare to Pinterest
Labels: Produce of the Week, spinach