Farms in My Backyard and a Pie

The stars had finally aligned: the sun shone brightly, keeping temperatures at a comfortable 83 F, and both my father and I were free. That could mean only one thing - a bike ride! We set off through Redmond, making our way over Union Hill, and into Carnation Valley. While I have taken this route before, I never felt so moved by the scene of pastoral perfection that greeted me. Only 10 miles from my home, you have entered farm country.
Founded in 1875 or 1876, the town of Carnation (originally Tolt) served as epicenter of the farming and logging communities in the valley. Unbeknownst to me until last night, Carnation actually owes its name (and any past fame) to the founder of Carnation Evaporated Milk, E.A. Stuart! The dairy Stuart owned beginning in 1910 still stands proud, plays host to one of Paul Newman's "Whole in the Wall Camps," and made an appearance on my Saturday bike ride.
More Carnation History
While Carnation still holds its own in the farming sphere of the Puget Sound Region (despite seasonal flooding), rural America has experienced severe declines in the past 100 years. According to the National Agricultural Statistics Service, the number of farms in the country has fallen from just over 6 million in 1910 to hovering at around 2 million today. Between outsourcing food production to other countries, condensing the number of farms to form larger operations, and the transition to mechanized cultivation, the need for labor and small farms has decreased dramatically. With such a rich agricultural tradition in our country, I find it sad to see the urbanization of land and communities. Well, perhaps we are experiencing a revival - a USDA report noted the increase in number of farms and diversity of operators between 2002 and 2007! If my own experience, and the wealth of food-related literature and campaigns, is any indication, perhaps we might be on the past to revitalizing this tradition after all.
On that note, it has been too long since I posted a recipe for you all to enjoy! I've drawn upon local ingredients, as usual, with my friend providing the rhubarb and the peaches and blueberries traveling in from just east of the Cascades. Being me, I've taken the gluten-free, vegan route ... and got rave reviews at a friend's bridal shower! 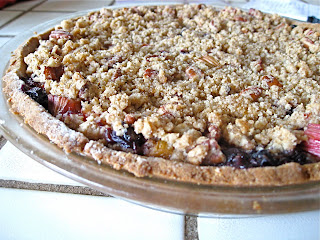 Rhuberry Peach Crumble Pie
Crust:
1 cup sweet sorghum flour
1/2 cup almond meal
1/4 cup tapioca starch
2 tbs sugar (fine, blend raw sugar if needed)
1/3 cup coconut butter (melty)
2 tbs oil
water as needed
pinch of salt
1. Combine all dry ingredients in a mixing bowl.
2. Add oils and work with hands until the dough starts coming together.
3. Dribble in water as needed so that dough can form a ball, but not be sticky.
4. Roll out between two sheets of parchment or wax paper. Do not refrigerate, as the dough tenses up. Place in pie dish and start your prep for the filling!
Filling:
1 cup chopped rhubarb
2 peaches, sliced
2/3 cup blueberries
2/3 cup turbinado sugar
2 tbs tapioca starch
1 tbs lemon juice
1 tsp cinnamon
1. Combine all ingredients. Yes, it's that easy. Let sit and marinate for as long as you want...I'd stick it in the fridge if it's more than an hour or so.
2. Preheat oven to 350 F. While preheating, stick in the pie plate with crust, just to set it up a little.
3. Once preheated, add fruit filling and bake for 15 minutes. Make crumble.
Crumble:
1/2 cup sweet sorghum flour
1/4 cup rice flour
2 tbs tapioca starch
1/2 cup turbinado sugar
1/3 cup pecans, chopped
1/3 - 1/2 cup coconut butter, Earth Balance, or combination, melty
1. Combine dry ingredients. Mix in oily goodness. Use hands to incorporate until crumbly and feels like wet sand.
2. Sprinkle evenly on top of fruit. Lower oven to 325 F. Bake for another 15-25 minutes, until fruit it very soft and crusts are starting to brown.
3. ENJOY! Good warm with a nice vegan coconut ice cream! 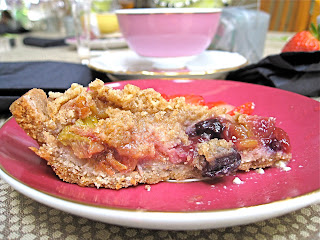 No no no. This will not do. Gluten-free vegan food is supposed to be inferior to traditional styles. It just sounds like you're eating too yummily, and I can't allow that.