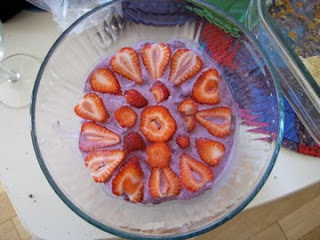 California fruit envy...I returned from my four days in the Bay with four pounds of stone fruit! Granted, we have better berries in the PNW.
They say that the third time is a charm, but I must politely disagree this turn around. I dream up fancy ideas for Daring Bakers' challenges all month, but when it comes to putting my plans into action and testing recipes, I come up short. The July 2010 Daring Bakers’ challenge was hosted by Sunita of Sunita’s world – life and food. Sunita challenged everyone to make an ice-cream filled Swiss roll that’s then used to make a bombe with hot fudge. Her recipe is based on an ice cream cake recipe from Taste of Home.
This time around I started early, when the friend with whom I stayed in San Francisco was overcome by a dreadful urge to use her ice cream maker! For the fourth of July (I know, only three days after announcing the challenge!), we pulled off a beautiful and tasty Red, White, and Blue...trifle. Apparently, the eggs in the Swiss roll cake recipe help hold the whole thing together! This still received rave reviews from all ten eaters involved.
My next attempt was inspired by a honey ice cream recipe in Edible Seattle. With a cornmeal cake and a plum jam filling, this should have been destined for marvels and wonders. Alas, the banana that gave the ice cream its creamy texture, overpowered all the flavors and the cake fell apart in the rolling process, again. Le sigh.
Finally, I decided to take the standard route and go with a chocolate cake (using chia seeds as an egg substitute for the first time) and espresso kahlua almond ice milk. Oh, and did I mention that you are supposed to roll the cake right after removing from the oven, while it is still warm. Yes, reading directions apparently has some merit. While this time actually yielded a dome-shaped ice cream cake dessert, it was far from attractive and not my favorite of the three. Therefore, I will not include a picture or a recipe. I will, however, pass on the outline for creating a scrumptious Patriotic Trifle, as that was truly a crowd pleaser! 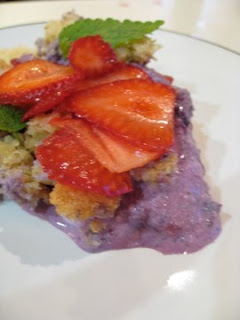 juice of half a lemon

3. Remove from oven and allow to cool.

14 oz can coconut milk (lite will obviously be less rich)

1 cup almond or other non-dairy milk

1. Heat lemon juice, blueberries, and sugar in a saucepan over medium heat until cooked down. Add lemon balm at the end and let sit while finishing up the milk.

2. In the meantime, heat milks in their own saucepan over medium heat, right to a low boil. Add some milk to the arrowroot to create a paste. Add back to milk in pan, along with blueberries and lemon balm. Heat until starting to thicken. Remove from heat and refrigerate until very cold.

3. Follow directions on your ice-cream churner. Note that adding a few tablespoons of some alcohol will prevent too many ice crystals from forming!

4. In a deep bowl, layer chunks of cake, ice cream, and sliced strawberries. Cut or scoop with a spoon and serve. Perhaps best with a few hours of freezing post-assembly. 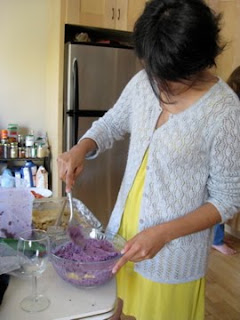 Thanks sooo much for the recipe and sweet post!

I feel lucky to have been a partner in crime and must say that the cake was fabulous and beautifully flavored.

Since I returned from the farmer's market with 5lbs of raw almonds, I think I'll have to make it again soon :)

It looks delicious! I'm new here and glad to find you!