Missing the Forest for the Trees? 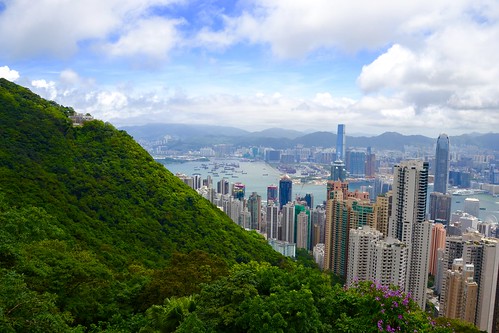 If you pay any attention to environmental conservation issues, you've probably heard of the big bad three: agriculture, logging, and mining. Most of the blame for habitat destruction and degradation, and biodiversity loss, is placed on these industries (and there's even a Nature Comment piece telling us this is the case ... but also hunting). Discussions naturally turn to how we can stop such harmful activities in places that have been deemed areas of high conservation value. We create national parks and protected areas, restricting the extent and intensity of these activities, policing the borders for infractions. We get companies to sign onto zero deforestation commitments. Sovereign nations sign onto treaties, conventions, agreements, that say they pledge to save X% of land, set aside Y% of coastal areas or the exclusive economic zones in marine systems.

This may get us somewhere - though the evidence we're actually conserving things is limited at best. But to me, it seems that we are treating little cuts and scrapes, when there's actually internal bleeding. We can keep bandaging our wounds, but the deeper issues are not going to get better on their own, and they will probably end up killing us in the long run.

Ok, that's pretty melodramatic! How do my mediocre medical analogies relate to conservation? Well, for one, agriculture is a major driver of forest loss and land cover change, and so we do things to keep agriculture out. But this is a proximate cause. We have agriculture because there is demand for livestock feed, for oil crops to use in processed foods and beauty products, for food to sustain a massive and growing population despite astounding amounts of waste. These ultimate driving forces are part of bigger societal challenges and forces of globalisation; conservation does not happen in a bubble.


I'll elaborate on this shortly, but you might be wondering what prompted this serious musing. Well, the 29th International Congress for Conservation Biology just wrapped up, where over 2,000 natural and social scientists and conservation practitioners came together to inch along towards solving some of our major conservation crises. It was the question after I presented on community forests that caught me off-guard: is it fair? Who are we to demand that communities take on responsibility for conservation? Now, this was definitely not the message I was going for, but the question struck a chord and got me thinking about how much conservation redirects responsibility. While likely not conscious, this tendency might have roots in colonial legacies, but it also mirrors other environmental justice issues. For instance, the countries emitting the highest levels of greenhouse gases are not the same as those most vulnerable to climate change and least able to adapt. The nations that are the most to blame are also not stepping up and drastically reducing their emissions (but we sure are suggesting how other countries should develop). Many of us, in the west-centred conservation field, focus on trying to fix what is "broken" in other places, while side-lining the major role we play in breaking it in the first place. 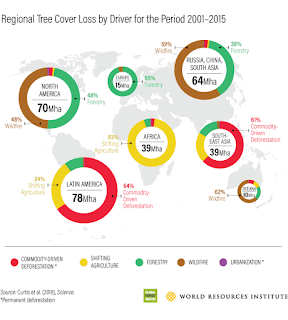 So let's come back to our big bad three; I'll focus on agriculture, which is the single largest culprit. Expansion of crop and grazing lands has been estimated to account for over a quarter of forest loss, and up to 80% in tropical and subtropical forests (and Queensland is no exception). The Union for Concerned Scientists published a report a few years ago that put the microscope on the industry: beef and dairy cattle ranching (about half the deforestation in South America) is the largest driver; soy production has doubled in the last two decades for livestock feed and oils; area under oil palm has skyrocketed in Southeast Asia to supply processed foods needs and biofuels; and finally timber and wood products still drive about 10% of deforestation globally.

We know that the bulk of this forest (and savannah!) loss occurs in South and Central America, Africa, and Southeast Asia. While beef consumption is apparently often in the same country of production, consumption of animal products generally positively relate to a country's GDP. China, the USA, India, and Brazil may be the largest consumers of soy, but Mexico, The Netherlands, Japan, and Spain also sit among the top importers. Palm oil's biggest consumers are China, India, and the EU (none of which are major producers).

It's not that nothing is happening to address these activities. There are initiatives through the IUCN and CBD to build a business case for conserving biodiversity. Sustainability standards for industry and finance are increasingly visible. And individual companies adopt corporate social (and environmental) responsibility policies. However, these industries will always be pulled toward profit and filling global demand. Government regulation can stymy rampant expansion, but it can't curb everything without shifting consumption patterns.

I don't have answers. Yet what seems to be missing in conservation is acknowledgement that proximate drivers of habitat and biodiversity loss aren't the root causes, and that we need more serious discussion around the deeper issues of consumption more generally. There needs to be more conversation like the one at ICCB in 2015 on countering capitalistic conservation. Perhaps we need to interact more with the Degrowth and Circular Economy communities. Regardless, business as usual is not going to get us where we need to be.

Great post! It's empirically difficult to determine the distal drivers of destructive actions in an interconnected global economy, and there are also difficult ethical questions about apportioning the blame, but you're definitely right that we need to think about it a lot more.

Just to disagree slightly, however: you say that the "nations that are the most to blame are also not stepping up and drastically reducing their emissions", but that's not strictly true. Some top emitters have substantially reduced their total and per-capita emissions in the past decade, including the USA (~10%), the Netherlands (~10%), Germany (~15%), Spain (~20%), and France (~20%). The best part is that it's not because the emissions went off-shore, or because the GFC tanked the economy (although the latter contributed). Instead, it's a switch to lower-emission and renewable energy sources, and lower energy usage.
https://www.nature.com/articles/s41558-019-0419-7