Food for Thought on Climate Change 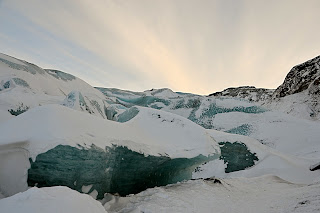 It feels as though every time I read the news these days, it seems like the world is falling apart. Whether that's because of the political climate or the actual climate, well, it's hard to tease apart sometimes. It's hard to stomach the actions and inflammatory language of intolerance and prejudice, openly condoned by supposed 'leaders'. But it's also increasingly terrifying to imagine the future world we seemed to have built for ourselves. Only about a month ago, the Intergovernmental Panel on Climate Change (IPCC) released one of its semi-regular reports on the state of our understanding of climate change - the anticipated impacts based on potential scenarios of greenhouse gas emissions. While the past few reports have stressed the importance of a low-carbon pathway forward, the conclusions of this report reached a new level of concern and urgency. To avoid catastrophic warming - 1.5 degrees Celsius - we have about a decade to get our act together as a planet (though a few countries really need to pull their weight).

Now, it's not like we're completely devoid of ideas how to do this. Most of the world has made the important step of recognising climate change is an important issue and pledging to do something (albeit, too little) to halt it. Alternative energy technologies have made amazing progress in terms of efficiency and affordability. Private companies and local government alike have taken steps to curb their emissions and adopt environmentally-friendly practices. While these disparate actions are important contributions and make a statement, we need something bigger and more concerted. And we will have to sacrifice now so as not to suffer too greatly in the future.

So a couple of weeks ago now, I went to a seminar on climate change beliefs and behaviours. The speaker Neil Lewis Jr of Cornell University raised a key point of debate - should those interested in climate-related behaviours focus on individuals or policy? The scale of the problem - and the fact our atmospheric pollution is a massive tragedy of the commons - necessitates broad sweeping changes likely instigated by policy. But without public pressure to elect officials that will push for those policies, and some willingness to make the sacrifices (I like to think of them more as opportunities...) those policies would require, we're not going to get anywhere (...smile for the new congress!).

Now Dr. Lewis noted that people often agree that something needs to be done, but not that it must be done by them. So in theory policy change is acceptable, but when it might raise costs (e.g. the carbon fee on Washington State's ballot), then it's a no-go. But people can and do change their behaviour, and perhaps the thinking around meat consumption is a good current example. According to a recent report by by the UN, dropping meat and dairy from our diets would contribute substantially to curbing greenhouse gas emissions. This isn't really news - I mean it made the news - even right after arriving in Australia, I reflected on some recent studies on the topic of meat consumption and environmental problems. While I definitely don't expect everyone to jump ship and turn vegan overnight, people are generally eating less meat and younger generations are more likely to go vegetarian.

And over the years, we've learned a thing or two about what influences people to change ingrained behaviours. Psychologists have demonstrated there are a number of structural and psychological barriers to changing behaviours - not the least of which is that facts don't seem to matter much when they fly in the face of strongly held views (#fakenews). A crucial point here is that motivations vary between people and backgrounds - so for food choices climate, the environment, or even animal rights (which is sometimes but not always related to the environment) aren't always forefront. But health and costs also may be deciding factors. To me, this suggests we need to do a better job of framing, and in the case of climate change actions doing so in terms of so-call 'co-beneits'!

As a final point, I just want to highlight that climate change mitigation presents challenges from behavioural psychology that don't apply as much to shifting diets, namely timing and proximity. Regarding the first, even William Nordhaus, who pioneered early work on discount rates for climate change action and one of this year's Nobel prizes in economics, has warned that it's too late to wait. However, discounting is very much in-line with how people approach planning and problem-solving. The future is distant, and very much future-self's problem. The immediate costs seem far greater than the avoided ones months, years, decades down the line - let's just say we prefer instant gratification and hate the feeling of loss. For the second, researchers have noted that there is a disparity between countries that emit the most greenhouse gases and those that will suffer most from the impacts of climate change. The U.S., for instance, has started to experience some of the effects with increased wildfire risks and greater intensity storms; but for the most part, the impacts are still this geographically distant phenomenon that don't directly affect many people's lives. Again, psychological studies have shown that people are much more likely to believe in and act on things related to personal experiences.

Ok, so at the end of the day, where does that leave us? Lots of super smart people are grappling with this question. But as with many problems related to common-pool resources (the atmosphere is everywhere!), it often requires some sort of rules in place to govern how people use it. Although it seems like there are so many causes we can be vocal and active about these days, climate change is not one that can wait, as it threatens the very existence of life on this planet.

AGNI AYURVEDA is a centre for Ayurvedic education, healing, and lifestyle practices. Our team of dedicated practitioners, trained in the art of Ayurveda or "science of life" are here to support your transformation and wellbeing. Agni Ayurveda is the premier provider of Ayurvedic services in New Mexico and we’re excited to share these restorative techniques with you. https://agniayurveda.com agniveda123@gmail.com

The likes of MyBookie and Bovada are 더킹카지노 properly versed in this space, and when you play often enough, you find a way to|could possibly|might have the ability to} faucet into some nice bonuses or enter any cash tournaments they may run. Get free stuff, recreation announcements, and all the latest news from the myVEGAS Blackjack team when you comply with us on social media. Sign up for the MYSTERY RANCH email publication and receive unique access to new packs, particular offers, and updates from the Ranch. The new Grazie® Rewards offers you the access you deserve. Always get one of the best suite rates, unique resort access, comps for gaming play, and more.