Who Walks the Line?

We joke sometimes about being starving graduate students, or the poverty of a 'research higher degree'. While most of us discussing this topic have never experienced true, chronic hunger, and have never reached the point where financial woes eclipse every other aspect of life, it is true that 'what is poor' is not entirely straightforward.

At the international level, major development organisations have worked to set poverty lines that delineate the point at which people across the world can't meet their basic needs. Countries individually define their poverty lines, and then the poorest countries dictate the international poverty line. This line set by the World Bank stood at $1.90 per person per day as of 2015 (based on 2011 data). How the poverty line is calculated - based on incomes and costs of goods, not to mention incomplete data - has faced its fair share of critiques over the years and more recently. But the concept of a poverty line itself, and whether countries are considered "developing", have also been called into question.
I recently came across an interesting discussion on tiers of income, and how those may be more informative and reflective of reality than a simple cut-off for those who are considered poor. This approach characterised four different classes of income, and how many people around the world fall into these categories. At level 1, about 1 billion people live on less than $2 per day, which translates into transport by foot, cooking over a fire, and fetching water with buckets. Around 3 billion people live on between $2-8 per day, and may get around on bicycle, use gas for home-cooking, and send their children to school. At $8-32 per day, we see around 2 billion people who have running water, might own a car or motorbike, and possibly have a refrigerator and electricity. Finally, the remaining 1 billion people live on more than $32 per day, and they typically own cars, have running hot water, and have been able to complete at least a high school education. This gives a sense of what people can afford, but what the knock-on consequences might be - such as having electricity makes it more feasible to study at home and progress in school. Taking this further step is in line with thinking of poverty as multi-dimensional. Someone's income is only part of the story. Access to services - like medical and education, supportive social environment, and relative sense of wellbeing can all contribute to an individuals' perceptions of themselves and poverty. 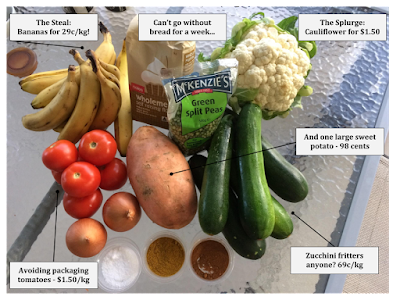 This week, I'm not giving up my comfortable living conditions (running water AND electricity), my postgraduate education and healthcare, or my perception of overall welfare. But I am eating on AU$2 per day, while garnering support for Oaktree, a youth-led organization that aims to educate and empower youth in the Asia Pacific as a way to alleviate poverty. Check out my fundraising page and keep tabs on this year's Live Below the Line challenge.

Email ThisBlogThis!Share to TwitterShare to FacebookShare to Pinterest
Labels: Live Below the Line, poverty