When you think of agricultural products from Indonesia, palm oil is probably the first thing that pops into your head. While the bulk of global cacao still comes from West Africa - particularly Cote D'Ivoire and Ghana - Indonesia clocks in as a close third in terms of the world's largest producers. For the most part, all these beans are exported unprocessed to the US, Malaysia, Singapore (or from Africa, Europe) to be made into chocolate. Unlike West Africa, where there is a narrow band of suitable habitat and climatic conditions - the high forest zone running toward the south - basically, all of Indonesia could viably grow cacao. Right now, about the same area is under cultivation as in Ghana - just for scale, Indonesia has about 8 times the land area - and Sulawesi makes up the bulk of the production area (about 75%), followed by Java and Sumatera.

At this point you may be asking yourselves, "why is she rambling on about cacao again? I thought that was over and community forestry was the new topic du jour." Well, the two are actually related! Very exciting. Cacao is one of these awesome crops that is traditionally grown in the understory of a forest. Young cacao needs shade to protect it during vulnerable stages, and older trees can benefit from the retained moisture and moderate temperatures. Yes, there are also production downsides, but agroforestry models of cacao production are tuned for the long-term, maintaining benefits like soil fertility and structure better than monocropped trees.

As such, along with coffee, bamboo, rattan, and rubber, cacao has been considered as a potential forest-based "alternative livelihood". Old habits die hard (especially when there is no desire for them to die at all...), so you can imagine my elation when cacao came up in conversations with community forest managers. (... up in northern Borneo, we quickly decided I would have to come back in 2-3 years to "help", once the trees had matured...). Though the prospect may be rather alluring, cacao is still a bit of a mystery to many Indonesian smallholder farmers and forest community.

Why? Well, I don't have a solid answer, so my musings will have to suffice. With regards to the other non-timber forest products: bamboo has always called Asia home and frankly grows like a weed; rattan is a natural forest crop in Southeast Asia that locals have used for centuries in household items; and although rubber is native to Latin America, it received years of attention during the colonial era and has largely remained a smallholder crop. Coffee has its roots in East Africa and a history in the region similar to cacao, yet somehow the product of this understory shrub has fed the global market for centuries and recently embedded itself in Indonesian culture (ngopi much?). Mysteriously, even though cacao - also indigenous to the Americas - has actually been present in the region since the 17th century, and cultivated in Indonesia since the late 18th century, it hasn't garnered the same interest. The crop didn't experience the same colonial heyday as in West Africa, and farmer disinterest combined with pest problems early on meant production remained limited until the latter half of the 20th century.

But Indonesia's time may have come. It happens to be an ideal place to set up shop in terms of the regional consumer demand and climate suitability. It also offers an opportunity to support multi-use forestry and provide a high-value cash crop for locals in areas where forests may be on the chopping blocks. That said, despite my enthusiasm for cacao as a potential agroforestry crop in community forests, I definitely have a few qualms.

First off, this involves planting non-native species. Not that we haven't already introduced a crazy amount of agricultural products into novel places (hmm, like oil palm, rubber trees, and coffee, to name a few here in Indonesia), but in this case it means doing so within forests meant to be restored or conserved for limited non-timber uses. Would we be losing some of the ecological value in deference to economic by planting non-natives? Or would the benefits outweigh the costs if it means maintaining higher biodiversity and general forest cover than business-as-usual?

Second, it's a slippery slope, towards commercialisation and global markets. In Ghana, cacao started as an understory crop, as well. But over time it has moved to being grown predominantly in full-sun. With government policy supporting the use of chemicals and new sun-loving varieties for greater production, soils have become exhausted, and problems like erosion arise. Would Indonesia follow a similar trend?

And finally, is there the support available to ensure capacity for sustainable production? Fair trade, Rainforest Alliance, UTZ certification, etc. are all active across African and South American growing regions (and present in Indonesia, though more quietly...). There are major research centres in Costa Rica (CATIE) and Colombia (CIAT) that both have cacao programmes and are active in trials and training on both continents (though there is the Indonesian Coffee and Cocoa Research Institute). Asia, well, is new to the scene and generally underrepresented. The industry will continue to be developed here regardless, especially since cacao in other parts of the world is likely to bear the brunt of climate change, so making sure does so with sustainability at its core is essential. 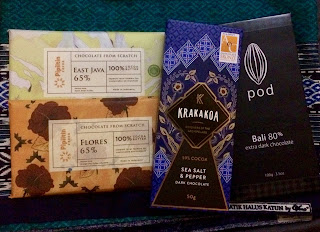 All of this is to say, if anyone is looking for a cacao agroforestry enthusiast (with little agronomic training but plenty of passion), I'll be on the market for gainful employment in roughly 18 months :)

AND If you're on the lookout for existing awesome Indonesian chocolate, give these a try:
Pipiltin Cocoa is a Jakarta-based bean-to-bar chocolate company that directly sources beans from Bali, Aceh, East Java, and Flores. [more from the founder]
Krakakao is an organic chocolate company that sources directly from farmers in South Sumatra, providing training and support sustainable practices around the Bukit Barisan Selatan National Park. They also have a few bars from Bali, Sulawesi, and North Kalimantan, including my favourite bar, packaged with a slow loris on it ...
Pod Bali was founded on its namesake island and sources all the ingredients locally and supports communities producing cacao in high conservation value areas.

Read More:
The Rise of Southeast Asia Chocolatiers - Michelin Guide Singapore, 2017
Inclusive Business in Asia: A Case Study of Cocoa - CSR Asia and Oxfam,
Posted by Rachel at 10:06 AM

Email ThisBlogThis!Share to TwitterShare to FacebookShare to Pinterest
Labels: agriculture, chocolate, chocolate with a soul, sustainability

Additional functionality additionally be|may also be|can be} added by choosing the coating movie for the reverse facet of the steel sheet. The capacity to omit the coating course of throughout forming helps the customer cut back the variety of processes, Toilet Plungers preserve vitality and space, and cut back environmental impact. According to the following information, this has the wonderful conductivity and corrosion resistance required in numerous AV and OA units. •For stainless steels, aluminium and titanium alloys typically.

Live from London, tracking the breaking and high business news stories within the lead-up to the opening of European markets. The info on this web site should not be used as various to|an different choice to} professional medical care or recommendation. Contact a health care 카지노사이트 provider when you have questions about your health. There are currently tens of millions of people within the US experiencing gambling related issues. In Pennsylvania, there are hundreds of thousands of people whose lives are impacted by problem gambling. The sum of money won or lost doesn't determine when gambling has turn into a problem.