I've started a couple of posts since arriving in Indonesia, but they both seemed too serious, too academic. It's the third time I've been in the country and, entering my fifth week now, the longest. So instead of going on about academic versus practical conferences, or the trials and rewards of social science data collection, I'm instead sharing five things that have struck me while here. 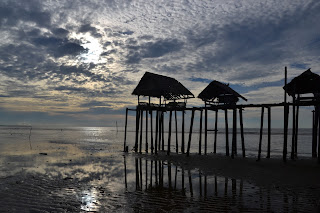 1. Jam Karet - The elasticity of time. Or literally, rubber hour. This is something I think many foreigners must come to terms with very quickly in Indonesia. In a city like Jakarta, traffic and a limited bus network mean that getting from point A to point B may take the better part of the day. I was thrilled on the days I accomplished multiple things (e.g. visit immigration and attend the second half of a conference; meet friends for brunch and visit the national monument). But, this is to some extent an infrastructure and practicality issue in a big city. The fluidity of time also seems to be more culturally embedded. My propensity for planning is next to useless here. Meetings will be set and then reset multiple times, perhaps the same day or a mere hour beforehand. Indonesians like to chitchat and socialise, and it's rude to abruptly end a meeting. Ultimately, going with the flow is both the path of least resistance and most likely to result in everyone happier.

2. WhassssApp... Scheduling brings me to my next point: WhatsApp. Communication is important, and WhatsApp is apparently the best way to get in touch with just about anyone in Indonesia. I started using this app to communicate with friends and family on different continents and in different time zones. But over here, it goes beyond the personal. I'm sending and receiving documents, organising meetings with government staff, and generally doing all scheduling (and rescheduling) through that channel. It's brilliant! It's free. You can send whatever, to whomever, at odd hours. And it gives me a chance to craft (likely overly formal, and grammatically incorrect) messages in Bahasa Indonesia.

3. Jalan-jalan...kaki? I love to walk. It's liberating and empowering to know that one's own two feet can take you places. But that is far from the case where I've been in Indonesia. Besides the insufficient pedestrian infrastructure, people generally seem more inclined to hop on a motorbike for the smallest of distances. When I proposed to walk the thirty minutes across town, I received confused facial expressions and incredulity. It contrasts starkly with my experience in Ghana, where walking was the most accessible means of transporting goods and people short distances - roads were bad and automobiles expensive. Walking from house to house there was glorious. That said, the motorbike here is definitely the most efficient means of getting around. And some of the things people manage to fit on their bikes is astonishing - anything from timber and pallets to baskets of chickens. I'm not going to lie; this trip has made me intent on learning to drive a motorbike, you know, for next time!

4. Goreng, goreng, gorengan - One thing that seems to unite humankind is our enjoyment of fried foods. As with most places with a strong street food culture, the warung (or food stalls) typically have an assortment of fried food stuffs. While nasi goreng and mie goreng - fried rice and fried noodles - are most commonly known, you can easily find fried tofu, tempeh, bananas, vegetable fritters, chicken, etc. The decided lack of vegetables in prepared foods for sale - and my inability to cook in my current living situation - is something I feel so acutely that I'm relishing every piece of water spinach or pepper that turns up in a dish.

5. Ngopi! Finally, one of the most pleasant surprises has been the vibrant and growing coffee culture. The kopi is what one might call 'sandy' ... Ground coffee is placed straight into the mug and hot water poured over. Give it a stir and then let things settle. It is commonly offered when making a visit, and is served strong and manis-manis (very sweet). Coffee shops are open late, and one of the popular evening activities even in a smaller city like Ketapang. While I'm not about to adopt the heavy smoking habit during socialising, meetings, and the like, I'll happily fuel a coffee habit!

So that's it for now. No mention of forests and conservation. No dwelling on research activities or academic pressure. Despite the stress of organising logistics and conducting interviews, doing "fieldwork" feels much more relaxed and real than sitting in the department, glued to a computer screen day in and day out. And eventually I'll elaborate on what really brings me to Indonesia.

Giving the #coffee from one of the villages with a community forest a try! #morningmotivation #Borneo #phdlife
A post shared by Rachel (@cioccolata16) on Nov 7, 2017 at 1:01am PST

Email ThisBlogThis!Share to TwitterShare to FacebookShare to Pinterest
Labels: Travel

Wonderful insight into your personal observations and experiences in Indonesia

Rachel—Anda akan tinggal di kalimantan barat berapa lama? I lived in Kalimantan Timor (Balikpapan) for two years a while back. I miss it a lot — so this was fun to read. I wonder if the nasi kunning and gado gado are as delicious in that part of Borneo. You must try to make it to Derawan off the coast of Tarakan. Selamat jalan!