This wasn't exactly a glowing week leading up to World Environment Day yesterday. However, while mitigating climate changes we've put in motion requires more globally coordinated action and government intervention (... the atmosphere is the ultimate common pool resource, no?), there are heaps of other environmental travesties that emerge in large part due to our decisions as consumers. World Environment Day's theme this year is about reconnecting to "nature", which is a lovely message with very little depth. Although hitting up green spaces - parks, wilderness areas, etc. - often benefits both human health and encourages positive environmental values, this idea of needing to "reconnect" implies we live apart from nature. The ambitions of this year's World Environment Day seem a bit modest for the scale of the problem, making the proffered actions far less meaningful if not connected to the consequences of our actions during daily existence.

But it's not a huge leap to connect our daily doings with the health of the planet. In Australia - and the UK before that - a pretty nifty three part series about the War on Waste tried to expose the nature of our "Throw-Away Society" and the consequences for the environment. for Oz, the numbers are staggering, ranging from 20% of our groceries ending up in the bin to 6,000 kilograms of fast fashion in the rubbish every ten minutes to 113 take-away coffee cups discarded every four seconds (that's 2.4 million in a day)! But plastics seem to be making the headlines these days.

Australia uses nearly 4 billion plastic bags per year, the majority of which end up in landfill (or inevitably waterways). Some researchers calculated that worldwide approximately 8 million tonnes of plastic waste ends up in the oceans each year. Once some of the most pristine beaches in the world are now littered in plastic debris. While this is an eyesore, a visual reminder of our plastic addiction, there are more hidden and insidious impacts. Almost every seabird on the planet has eaten plastic - which may not always kill the bird, but can't be particularly good for it. But plastics also break down into smaller and smaller particles. These then accumulate along the food chain, similar to other toxins in our environment like mercury in tuna. We don't yet know how harmful all of this is, but we can make sure it doesn't get worse. 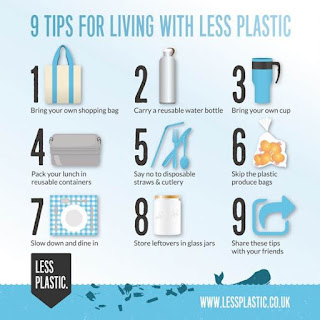 This last week, UQ sustainability challenged staff and students to contain all single-use plastics in a small jar - mine was 350mL to be precise. The idea was to be more aware of our frequent and often thoughtless use of disposable plastics, and to consider steps to take to reduce. Sure, recycling is a good first step, but it's not a guiltless affair. Not every plastic is recyclable nor gets recycled, and even if it does, it takes energy to go from plastic bottle to new plastic something or other.

But the alternatives are hard, because they rely on people changing their daily actions and breaking habits ... and let's face it, even the well-meaning of us just can't be bothered if something seems like too much effort. Making your own shampoo may seem like an impossibility, but there are plenty of low-hanging fruit. Bring a cloth bag or a reusable mug, and don't succumb to the draws of straws or pre-bagged produce. It's just a matter of making simple behaviour changes part of your routine. Easy.

So on this World Environment Day, rather than just "reconnect with nature", try reconnecting with your personal impact on the planet and commit to doing something about it.

In case you're also interested in food waste, it's a favourite topic...
Jingle the Waste Away
Smashing Pumpkins
America the Wasteful
Posted by Rachel at 4:34 PM

Truly the best blog I never got such information before this thanks. Gary Anderson