Ode to My Chacos 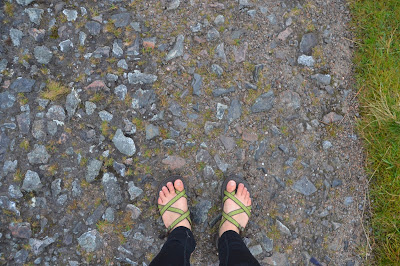 I've been wearing my Chacos. Not just as the sandals you put on at the end of a day of hiking, when the thought of one more moment in boots sends you into a panic. No, these babies have recorded not just a few miles. The end of my five day trek along the West Highland Waylast month merited a musing, at least.

Ode to My Chacos
It was seven years ago, summer 2008,
(Little did I know, it must have been fate).
I was given a gift, some money to spend,
On more practical footwear, whose soles did not bend.
I settled on Chacos, Tevas gone out of style,
And I'd wear them on sunny days, every once in a while.
Then over time, they came out more and more,
From walking to hiking to cycling galore. 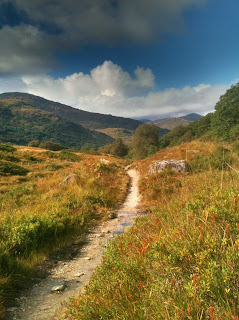 Pair one, alas, left me prematurely,
Though made it through Europe, before not strapping securely.
The second lived to a grand old age,
Six years could be considered quite sage.
Treking through Costa Rica, Ghana, the Pyrenees too.
Also Sicily and Croatia - a well-traveled shoe.
The third, the current, is just finding its place,
Walking the Highlands, across wide open space.

So the next time someone tells you it will not do,
That you need water-proofed and close-toed, it just ain't true.
A cross-border club of strap-tanned feet,
Without which life just would not be complete.
You may think it crazy, even a bit hardcore,
But I've found Chacos my choice when I want to explore.

This little poem could never do justice to the sandals that protect my feet each day for the majority of the year. But hey, I tried. We will return to regularly scheduled programming next week (ie food and environment).
Posted by Rachel at 2:15 AM