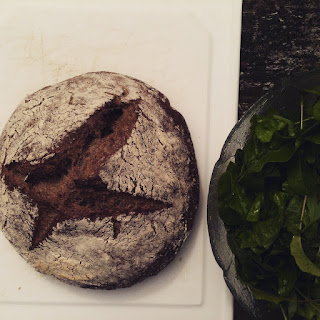 You may have figured I fell down a rabbit hole or got lost on the way to library. And while either of those things are likely to happen here in Oxford, I can sadly use neither as an excuse. Rather, it just so happens that the more work I have - the more looming deadlines, the more time spent sitting in front of a computer screen - the more I bake (and the less I apparently write on this blog). Friends know this to be the case, and often benefit from a plethora of carb-laden delights that one person should never (and yet, sometimes does) consume alone. 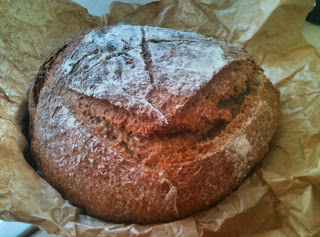 It's a strangely meditative and calming activity, which requires patience and planning. Operating literally by feel, it is also a very personal pasttime, one in which many of the bakers I know have strong opinions and preferences about process of kneading (or not), fermentation (how long), and composition (how hydrated). Luckily for you, I am not one of those people - though that might explain my bread-baking's inconsistent results. And I'm also not here to wax on the joy of baking, in spite of appearances to the contrary. 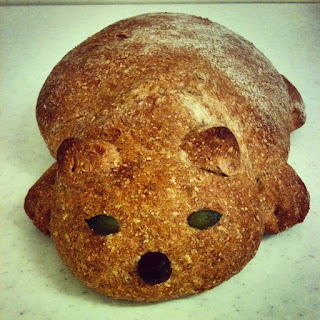 On a Skype not too long ago, my father (yes, I know you're reading this) commented on what a challenge it must be to make bread without a breadmaker or a stand mixer and breadhook. While surely those modern amenities facilitate and standardize the production of bread at home, they are by no means necessary. In fact, this comment made me pause, and reflect that actually people have made bread without mechanical aids and in much less optimal conditions for thousands of years. So of course this prompted the ensuing storm of Google searches.

Now, many of you are familiar with baking using packets of dried yeast that you then activate in warm water with a pinch of sugar. But that 'invention' of packaged and ready to use yeast happened only in the last century and a half. Bakers have used the 'wild' yeast present in the air for much longer. Often referred to as a sourdough 'starter', the naturally occurring Saccharomyces species of yeast metabolize the sugars in grains to produce carbon dioxide and leaven the dough, while the presence of Lactobacillus bacteria create a distinctly sour flavour. Saccharomyces is also used for alcoholic fermentation in wine and beer; in fact, some theories have wine and beer as the first leavening agents in bread!

Bread is one of the foods that marks our species' transition from hunter-gatherers to agriculturalists over 10,000 years ago, initially the result of baking a porrige-like concoction of grain and water on hot stones. The flatbreads (think pita and corn tortillas) still form the basis of diets in many cultures, and must have developed independently in places as different as the arid Levant in the Middle East to the humid forests of South America. Then as far back as 6,000 years ago in the bread basket of ancient times, and likely by accident, that fateful mixing of yeast and ground grain results in a leavened loaf.

It's interesting to reflect on the evolution of this staple food over millennia. What is required of me today - mix flour, water, starter, and a bit of salt; let the dough sit for a day or so; and then preheat my oven and bake - is far less arduous than for my predecessors, even without an electric mixer. But I think perhaps less recognized and yet just as drastic is the change in substrate - from coarse whole grains ground with rocks to finely sifted milled flours. The clean white dust, which we call 'All-Purpose' in the US or 'Plain' here in the UK, bears little resemblance to its ancestors (and is of little use in baking a good loaf of bread). And perhaps for that very reason there seems to be a resurgence, even a rennaissance, of artisan baking of late - both in the home and as businesses. After tasting difference, it's not hard to understand why!