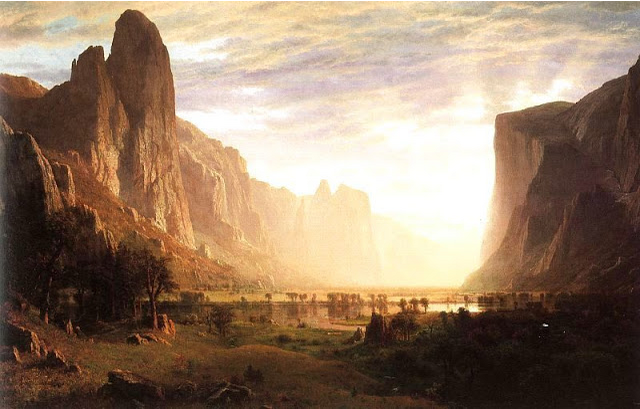 Lush, verdant forests. Majestic and imposing snow-capped mountains. Those valleys and creekbeds that seem as though they are worlds away from human civilization. These are the images that usually come to mind when I think of nature. But the funny thing is that few places (if any) on Earth have escaped direct human influence (and not one is safe from anthropogenic climate change). And yet we try to preserve the things that evoke these images of untouched wilderness. A few days ago, I sat in on a presentation (followed by a quite stimulating discussion) on cultural landscapes and the practice of nature conservation in the United Kingdom. The conservation paradigm here contrasts drastically with that of the US, where small scattered reserves amongst towns and farms are the default in the former, and large swaths of seemingly untouched terrain dominate the latter.

Before we go any further down this road, however, I did not set out to write a blog post comparing the UK and US national park system. Rather, I wanted to mull over the significance of our conceptions of nature on our cultivated landscapes. Close to the entirety of Great Britain was in fact cleared of forests during Roman occupation around 3,000 years ago. Crop cultivation and livestock grazing has dominated the island's landscape ever since. Despite the increase in forest cover in the past century, the UK holds the office of second least forested country in the European Union. According to a report on the UK, 70% of land is used for agricultural purposes (including farm woodland). Furthermore, while nearly 30% of the terrestrial land surface is now protected in some way, many of these are small and dispersed throughout the countryside to include towns and villages. If you look at the EU generally (though, the UK is quite distinct...), the majority of protected areas are under 100 hectares in size.

Now take the United States, with its vast swaths of untapped potential out west at the dawn of the 19th century. Some protected areas (at 27% of the terrestrial surface), particularly the ones in the Northeast, resemble those in the UK, but many are comprised of large tracts of connected land. The really big ones are out West, stemming from a frontier mentality, reminiscent of the sense of adventure and wanderlust stirred by such stories as the Lewis and Clark expedition. From my perspective (and I don't profess to be an expert, mind you), one of the biggest differences between the approaches to protected areas and national parks in the two countries, is their degrees of 'otherness'. Sure, it's going to be quite a haul to get out to Lake District National Park in NW UK, but it's accessible by train and there are plenty of towns skirting the area. Did I mention that there are ponies in a national park in the southwest of England? Going to a National Park in the US often requires moving one's self from habitation and civilization to something out there, apart from people, an escape.

Getting a wee bit too philosophical? The inhabitants of the British Isles have had millenia of interaction with their environment, to modify it, to cultivate it, to recultivate it, to 'tame' and then mimic what was considered nature. Naturalists abound here - birdwatchers control the small reserves and woodlands that pepper the countryside. Pastoral characteristics of the countryside are accepted as natural, as being part of a common resource to ramble. It seems to me that the definitions of nature and agriculture have gotten intertwined, not from either a more enlightened or perverse perspective of natural, but rather out of necessity due to land scarcity and a long history of land cultivation and pasture.* Despite knowing that North American human habitation dates back at least 14,000 years, large animal extinctions were attributed primarily to humans at that time, and considerable associated landscape change has occurred, we still hold this conception of nature as distant and separate from us.

So getting back to my initial interest in this topic, I wonder how the relative proximities to what is considered nature influences our relationship to what the land produces. Though the proportion of large farm holdings is pretty comparable (around 20% of farms are over 250 acres/100hectares) in both the US and UK, size may not always be the best indicator of character, nor of how people connect their food to the environment. In the US, are we doing ourselves any favours by sequestering so-called nature in large reserves, removing people from a daily (or at least somewhat more frequent) interaction with a non-concrete environment? But in the UK, is there a misconstrual of the concept of 'nature', a conflation of a heavily managed pastoral landscape (which produces our food and other services) with something 'natural'? It's a hard nut to crack - determining where the manmade ends and the nature begins. But even more difficult is deciding if it even matters.

Decidedly more muddled than when I began, I humbly welcome any comments, thoughts, and ideas.

* Since my UK wanderings are still limited, I should note that I don't know the extent of ruralness in the country. However, considering I do live within an hour of London, and it is only a hop, skip, and a jump (or a ten minute run) to "countryside", the lines seem pretty blurred between nature and human inhabited landscapes.
Posted by Rachel at 1:58 PM