What's Cooking? On the Wild Side 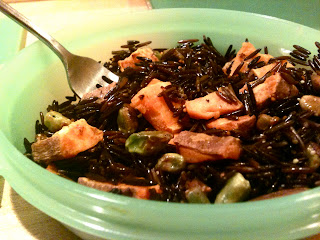 Today is the 43rd observance of Earth Day. While some might argue about the futility of an uphill environmental battle - how far have we really progress in close to half a century? - to me the encouraging piece is how much the shape of the discussion really has changed. Today is not your 1970's America, where a burgeoning environmental movement would be considered hippie-fringe. Sure, back in 1962 Rachel Carson had brought to the forefront the serious impacts of disregard for environmental well-being on nature and human health. But a growing awareness among the general public and active, vocal opposition are quite different.

This is not to say that acceptance and consideration for the environment is entirely mainstream, or that goals of the movement are even being met. It seems like now every cause has its celebrity (including the range of environmental issues), and that the facade, the image, holds more weight than tangible outcomes. All that said, the globalization of environmental awareness and growing urgency and pressure to act has never been stronger. This year's Earth Day theme is "Faces of Climate Change," which I think is particularly indicative of the shift from a domestic, 'my back yard' approach to conservation and environmental issues, to a better understanding of the interconnections between each of our actions and sustainability. Particularly with a challenge such as climate change, which really is a problem on a global scale, it can not be solely about one individual or one country's action.

While not really related to Earth Day or global environmental or food security issues, wild rice for some reason makes me feel closer to the planet on which we leave. Perhaps because it's more rustic, less refined, and is actually native to North America. Who knows? But bringing up food and how we grow it on Earth Day especially is critical. Rice crops themselves are hugely impactful around the world - using considerable water resources and oftentimes involving significant inputs of pesticides and fertilizers. At the same time, depending on who you ask, between one and three billion people depend on rice for calories and nutrition. Wild rice, while probably deviating some now that it is sold in grocery stores, is a grain traditionally foraged by Native Americans (though also grown in China and other places) in swampy areas and more nutritious than polished and processed white rice that dominates the world's markets. I'm not saying that it is even feasible to feed the world on wild rice (that would be neat), but that both nutrition and environmental concerns are inherent in discussing the ubiquitous rice crop. More next week when rice makes up a much more significant portion of my own diet! 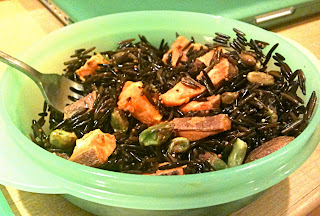 This is one of those toss-n-go salads. There is a bit of foresight necessary...or you can start soaking wild rice and then forget about it for close to a week like me. Regardless, toss all component pieces together until evenly coated. Enjoy!

I'm also posting this on Wellness Weekends and Slightly Indulgent Tuesdays. Also, awesome Google Doodle...
Posted by Rachel at 8:44 AM