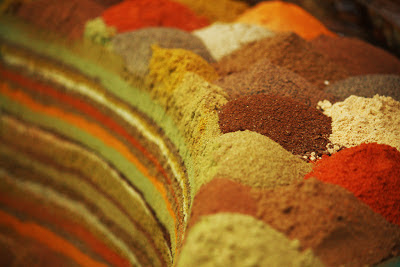 Spices have long had a certain mystique to them. The dried seeds, roots, bark, or fruits of a plant have been used for thousands of years to add flavor, color, and complexity to culinary concoctions. Herbs and spices were sought for medicinal purposes, to cure the bad humors. Used in religious ceremonies and for preservation or embalming, spices made their mark in the historical record. Movement throughout much of the ancient world was due in large part to trade of spices. And during the middle ages, these coveted commodities fetched a grand price on the European market. They inspired conflict and war, and spurred on exploration and an age of discovery around the globe. It's interesting to consider that the now commonplace cinnamon or pepper were once treasured status symbols of civilization. 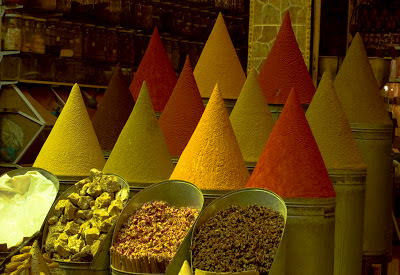 What I find fascinating about spices, though, is why they have such potent flavors and medicinal properties. According to a Cornell study now a decade and a half old, found that chemical compounds in common spices act as anti-bacterial agents. Not surprisingly, those same chemicals are what ward off pests that threaten the plant's survival. And if you are a proponent of cultural evolution, you can see how taste might be influenced, and more likely to survive to the next generation, in circumstances where cooking used a lot of spice to kill of bacteria in food. In Ayurvedic tradition, herbs and spices are also noted for their impact on digestion and properties that affect the constitution (such as heating and drying). Ginger, cumin, and turmeric all support strong digestion, and pepper and garlic have powerful antibacterial properties.

1. Heat oils in a sauce pan over medium heat. Saute onion and shallot, with mustard seed, until translucent, about 5 minutes, and then add garlic.
2. Pour in water and bring to a boil. Add split peas and allow to cook for about 15 minutes. Continue to cook another 10 minutes with carrot, parsnip, and sweet potato.
3. Conclude by adding in the array of spices, adjusting accordingly for your taste, but don't be shy! Allow to simmer another 15-20 minutes. Serve in a bowl as soup, or reduce the amount of liquid by 3/4 cup and serve with rice.