Best of MMM: Growing a Generation of Farmers

First Sunday back, and I'm happy to be at market. But with only a week left until grad applications due, you are still stuck with reruns. Luckily, this one allowed me to pull a nice pic from market (hope J doesn't get mad at me...) and revisit the worrisome statistics related to young farmers. With added support pending, perhaps a 'beginning farmer' piece of legislation, and the new aura of 'coolness' around farming, will entice some folks of my generation back to the land.
--- 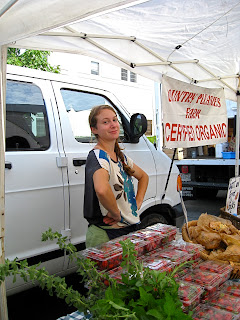 It is no secret that the number of farms in the United States have decreased dramatically in the last century. In 1900, nearly 40% of the country's population was in farming, but by 2000 this had fallen to 1.9%! The number of farms also fell by 63%, consolidating to fewer larger operations. And while the number of farms has grown a bit in the past decade, it still only stands at one-third the number in 1900. While population moving out of agriculture is considered a sign of development, the dwindling rural population is a bit worrisome.
However, this trend may be in the process of reversal. NPR recently ran a story on the next generation of young farmers. With most young people of generations past trying to leave farm life, the average age of farmers has been on the rise for decades, 55 years in 2002. The article presented both sides of the picture (interviewing one of our farmers at Dupont Circle farmers market!), but also gave me a sliver of hope. While folks in their 20's and 30's may still be starry-eyed idealists, it seems like we want change badly enough that this may be more than a fleeting movement.

Grist, too, recently posted on the issue of young farmers, with regards to the upcoming Farm Bill re-authorization. The article stressed the difficulty of acquiring start-up capital, particularly for those interested in small-scale and diversified farming systems. Farm Bill financial assistance is more geared towards large commercial operations, producing dairy, grains, or meat. And getting a hold of land is another daunting challenge. And these hurdles don't even account for the difficulty of making a living from growing non-commodity crops!

Despite all of the road blocks, there are a couple of exciting things in the works. There is a National Young Farmers Coalition. That in and of itself is exciting! Second, a Beginning Farmer and Rancher Opportunity Act, that will hopefully be included in next year's Farm Bill, would work to alleviate some of these financial stresses that currently bar many young farmers from entering the scene.

So, nothing is settled yet, but I think we have a lot to look toward on the horizon!
Posted by Rachel at 6:00 AM