I may have gotten home yesterday, but I am in no fit state to write a blog post. Luckily, there are plenty of past posts on climate change to fill the space. This one from early last year touches on climate impacts on two of the most beloved commodity crops - coffee and cacao. Sound familiar? Well that's because less than a month ago there was more hype about the end of these as we know them. At least you can make tasty, caffeinated brownies to drown your sorrows...
--- 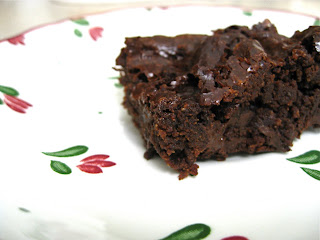 We ended last week covering the floods and droughts wrecking havoc on crop production across the world. To build on the trend of climate change-induced extreme weather events, I thought it would be nice to discuss the impacts of a changing climate on a few agricultural products - a commodity crop, a major cereal grain, and your backyard veggie.

While we recently explored coffee's impact on biodiversity and ecosystem function, tonight we'll flip the coin and

look at how these climate shifts will impact coffee. Arabica coffee grows best in sub-tropical and tropical regions of the world, with temperatures moderated between 15-25C and wet/dry seasons clearly defined. Robusta coffee is less sensitive to climatic variation. Flowering and seed production relies on rainfall, so one can imagine that as droughts become more frequent and severe in the rainiest regions of the world, coffee production will begin to suffer. Essentially, whether it's too much or too little, the negative impact holds.


Already we are seeing yield decreases and crop losses due to decreased rainfall in Costa Rice or the flooding Colombia. An article last week at TreeHugger considered the "peak" of high-end coffee (like Arabica), with temperatures and rainfall patterns moving away from favorable growing conditions. Laderch, et al. (2009) completed a study modeling areas that will still be suitable for coffee production in Nicaragua and Veracruz, MX, and how the varieties cultivated may have to shift. They also speculated on possibilities for adaptation in these seriously impacted regions.

Last week, the Seattle Times posted this video on the impact of climate change on Costa Rican coffee farmers, emphasizing the already dire need for adaptation measures and the looming challenges all crops will face. Last Wednesday was a hot day (no pun intended) for coffee, with the New York Times also running a piece on climate change and Colombian coffee. Rust, a fungus capitalizing on warming temperatures in the higher montane altitudes, is of particular concern and has decimated crops. Check out the videos and photo set from the article.

So what did I do in response? Drown my sorrows in a decadent treat using three major tropical commodities - sugar (Whole Foods fair trade cane sugar from Malawi), chocolate (Trader Joe's cocoa powder from Colombia), and coffee (Starbucks Komodo Dragon Blend from Indonesia).

1. Whisk together oil, molasses, sugar, apple butter (or whatever you are using) and Khalua. Pour in hot coffee and continue to whisk. It should dissolve all the granule-y sugar. Combine cocoa powder until uniform.
2. Mix in tapioca, millet, and rice flours, along with baking powder and salt. Once all incorporated, fold in melted chocolate and chips.
3. Pour into a greased 8x8 inch pan, baking at 350F for 30 minutes or so, until edges are set. Leave in a little longer if you don't want uber gooey, underdone, yumminess of brownies.

Enjoy your little piece of heaven before Global Weirding turns coffee (and cocoa) production on its head! Commodity crops, such as the cocoa, sugar, and coffee of the world, may only be a small piece of our agricultural puzzle, but they have broad implications for smallholder livelihoods in developing countries. While we will be exploring food stuffs that more directly impact hunger in the ensuing posts, keep in mind that these 'luxury' items (because that is what they should, and will, be) are essential income earners for many tropical dwellers and DO put food on the table.
Posted by Rachel at 6:00 AM