Best of MMM: Of Mungbeans and Millet

Let's follow Wednesday's vein of grains, and re-examine this notion of 'orphan crops' (explained below). I added a bit of Asian flare to this post from last year, and thought it would be timely to bring it back out, considering my current location. Also, happy last day of November...
--- 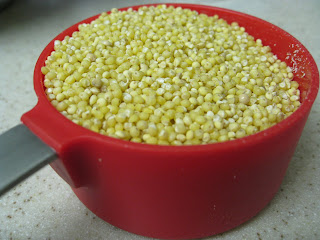 Wheat, rice, soy, and corn make up the majority of the crops traded on a world market and providing about one third of calories to people around the globe. While these commodities obviously play a critical role in food security, a large segment of crops remains out of the limelight, but still very much vital to allaying hunger primarily in developing countries. These edibles, local in production and consumption and neglected in the area of agricultural investment, are known as 'Orphan Crops.' To feed a hungry planet, more investment needs to go towards propagating and improving these varieties.

Millet is one of the orphan crops adapted to dry conditions. Cultivation dates back 10,000 years in Eastern Asia, and it seems to have predated rice on the Asian continent. Now, India produces the greatest quantities of millet, though it is also widely grown in parts of Africa and China. Like quinoa, this grainlike seed actually comes from a grass, and is used largely as a flour, porridge, and animal feedstock. In Taiwan you can even get millet beer, or the liquor rakshi in Nepal!

Mung Beans are another ancient crop native to Pakistan and India. Where in Asia, Africa, and parts of Latin America, mung beans are a nutritious legume for consumption in soups and curries, in the U.S. the beans are really only recognized as your salad bar sprouts! They are also ground into flour to produce cellophane noodles and are rich in fiber and protein.
Last night, I took my inspiration from the Indian tradition of Moong Dhal, a dish that is supposed to balance the three doshas in the Ayurvedic tradition. For my millet, I based my recipe on Mark Bittman's Autumn Millet Bake. 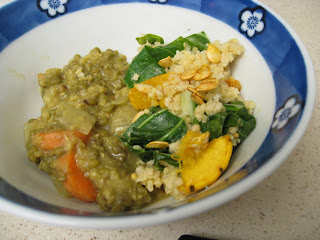 1. Heat half the olive oil in a sauce pan over medium heat, and toast the millet for 2-3 minutes until lightly toasted. Add liquid and raise heat to bring to a boil. Reduce heat, cover, and simmer for 20-30 minutes, check to see if more liquid is needed or desired texture has been reached.
2. Meanwhile, in a preheated 375F oven place a an oiled (with the rest of alottment) pan with squash and seeds, salted and spread evenly. Bake for 10 minutes, and then remove the seeds and let cool. Flip the squash and cook another 20 minutes until very tender.
3. Once millet is cooked - I like mine slightly toothy - add greens, cinnamon, and agave. Cook until greens are thoroughly wilted. Throw in your squash and seeds. Salt to taste. Serve with a good and nourishing dhal!

Although I might be enjoying these orphans for their nutritional benefits and overall flavor, what role do they have in an ever-consolidating world food economy? Stanford Professor (and my World Food Economy Prof!) argues that investing in these locally-adapted crops will prove to be critical to adapting to global changes and feeding the growing population in the developing world.
Posted by Rachel at 6:00 AM