It's pretty incredible, but October is three-quarters of the way complete. That also means another Vegan Month of Food is nearing an end. Last weekend was really fun with vegan Chopped, so I thought I would this weekend's Iron Chef MoFo! It's pretty simple - use the two key ingredients in the creation of a new recipe. So what's on the burner this week? Potatoes (sweet potatoes included) and Sesame!

This is very indicative of the turn of the seasons. We're moving into potato time. Spuds are this amazing diverse group of starchy tuber vegetable - critically important to the food security of populations around the world (but the Andean region in particular). Propagated through runners, you can literally plant a sprouting potato in a large pile of fertile soil and have a mound of potatoes in a matter of months (ok, perhaps a bit more complicated).

In fact, there is an entire research center devoted to potatoes! First domesticated 8,000 years ago, approximately 3,000 varieties of potatoes exist. This genetic diversity has significance even for modern-day crises - from the great Irish potato famine (this links to a great explanation of the dangers of monoculture) in the 19th century to the present massive loss of potato diversity. All that said, what did I actually make? While potatoes originated in South America, this challenge draws in the Far East. 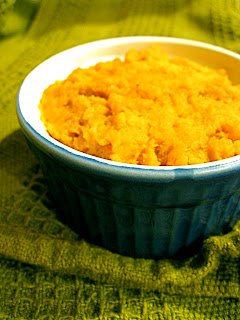 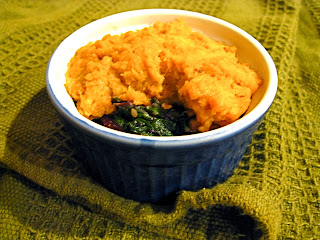 1. Soak soy curls in soy sauce and boiling water. Meanwhile, heat up sesame oil in a skillet over medium-high heat. Start to cook green beans and mushrooms.
2. After ten minutes of soaking, pour the entire mix into the pan and continue to cook.
3. Meanwhile, microwave your baby sweet potato (pierce a few times by a fork) for 3-4 minutes, until soft. Peel and then mash with said fork along with tahini (which is sesame paste!), agave, and miso. Set aside.
4. Add garlic powder and greens to the pan. Cook down the greens and then pour into a small casserole dish. Top with sweet potato mash and broil for five minutes or so. Serve!
Posted by Rachel at 6:00 AM

Nicely done. What a fun twist.