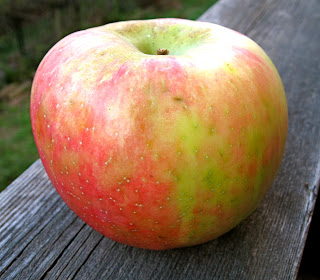 September 22nd marked the Autumnal Equinox. It is one of the days in the year when everywhere but the poles experiences approximately 12 hours of daylight (equinox = equal night). Yes kids, we are firmly planted in the Fall season! What this also means is that we have transitioned away from the summer produce into apple, pear, and winter squash territory. And apples are of top-tier concern for pesticide use, impacts, and residue. However, regardless of the arguments in favor of eating organic, it is hard to convince a market-goer to look past the ugly exterior of an East Coast organic apple.

Most of the organic apple production takes place in Washington and California. Why is that? Well, east of the Mississippi, a set of pests and diseases that thrive in the humid weather ensure that growing organic fruit is definitely not as easy as pie! And while Integrated Pest Management (IPM), a method that uses more targeted applications of certain chemicals, has grown in popularity, finding a full-fledged organic fruit producer nearby is difficult. Besides being just plain difficult to grow, organic fruits also tend to look less than perfect in the eyes of their beholder. (This blog post from a New York farmer explains a bit more.)

Did I ever relay how my housemate tossed a sack of slightly spotty apples he thought had gone bad? Or the look of distaste on a shopper's face as she passed by our boxes of mottled heirloom fruit? The glossy, picture-perfect apples found in the grocery produce section, and even to some extent the non-organic stands at farmers markets, have developed this false perception that our food can survive threats from insects, fungi, bacteria, birds, what-have-you for a photo-shopped finish...which it can to a certain extent with the help of outside pest 'deterrents.' However, beyond their superficial and exterior blemishes, organic heirloom varieties of apples have a character and depth of flavor (not to mention conscience boosting lack of chemicals) all their own. That said, it is a constant struggle to motivate people to look beyond the bumpy, speckled, rough exterior and acknowledge the more redeeming qualities of organic apples.

And therein lies the question - what does it take to move a society that buys with its eyes to sacrifice some aesthetic qualities for taste and health? Make apple carrot bread? ... 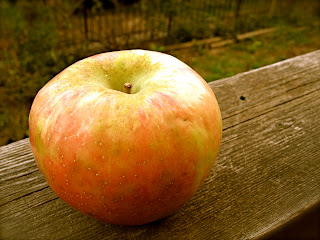 1. Grate carrot and one apple into a medium mixing bowl. Mix in oil, sugar, agave, and water.
2.  Gently combine with flour, salt, baking powder, cinnamon, and ginger just until all ingredients are incorporated. Add more liquid if it becomes too gluey.
3. Fold in second apple, diced, and vinegar. Oil and flour a loaf pan. Pour in batter. Sprinkle top with sugar (optional, but makes a nice crust).
4. Bake at 350F for 30-45 minutes, until a knife inserted comes out clean.

Photo to be posted soon. Check out more goodies on Slightly Indulgent Tuesdays.
Posted by Rachel at 6:00 AM