...conventional, organic, IPM, slow (food). This Sunday, as I made my way around the farmers market, I realized how difficult it can be to make heads or tails of the products available. In an ideal world, you would hang around the farmer's stand, chatting about the type of pest controls he employs or her use of rye as a cover crop in the winter (and as a vendor, we love talking about that). But let's be honest; as you sidle in at ten-til the closing of market, an engrossing conversation about compost is not always a priority. 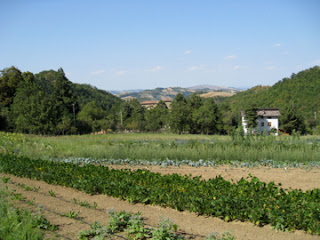 However, you can get a pretty good sense of the general genre of practices a farm at your market employs. For example, in Washington DC, I can count the number of certified organic produce stands on one hand, but there are many more that practice knowledge-intensive and more ecologically conscious methods than purely chemical-reliant production. So, I sought to find out what exactly was the implication for my favorite orange tuber, the sweet potato, at the conventional Sunnyside Farm and Orchard (they actually exercise much more restraint than larger scale commercial operations), IPM-practicing Twin Springs Fruit Farm, and organic certified Next Step Produce. So what's the deal? Should I really pay attention to the origins of my beta-carotene-rich root?

Organic - the national standard for organic certification sets the bare minimum criteria for an operation to be considered organic. Oftentimes, State certifying agencies, such as Oregon Tilth, employ more stringent standards, as do other countries. The philosophy of the organic movement as it was founded embodies the notion of integrating biological diversity, healthy soils, clean water, and other essential services for a sustainability agricultural production system. However, presently no synthetic chemical pesticides, herbicides, fertilizers, antibiotics, or hormones may be employed. Use of any genetically engineered organisms is prohibited, and there are additional stipulations for animal welfare. That said, there are many ways to still produce food as any other large commercial agribusiness, while still holding an organic certification (see any of your large organic foods companies). This is not necessarily bad, and probably not something you will run into at a farmers market, but an important consideration to keep in mind. 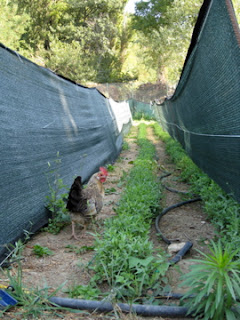 Integrated Pest Management (IPM) - now we get into shades of gray. According to the Environmental Protection Agency (EPA), this is an approach that "relies on a combination of common-sense practices." Unlike in organic production, application of synthetic chemicals is not completely outlawed, but instead timed to coincide with specific points in pest's life cycles. The judicious planning and combination of multiple techniques for controlling pests sets IPM apart from convention blanket use of pesticides, herbicides, and fertilizers. Although focused primarily on the pest management aspect of growing food, IPM methods, such as biological controls and economical water use, are very knowledge-intensive and can also help achieve some of the other benefits inherent in the spirit behind organic production. Read more about IPM on the UC David website.

Now, going back to my sweet potato, I had to ask whether or not it really matters that I buy an organic vegetable. Generally, a good rule of thumb is if you eat the skin, it is better to purchase low or no chemical produce. However, root veggies assimilate the chemicals into the whole plant (if you want to watch a cute video...).

Now, this is not to say that I will never purchase conventional produce. But knowledge is power, so take this information to heart, and choose wisely what you buy.

This article lays out the difference between the terms "organic" and "sustainable," which often connote a similar meaning, while not actually being equivalent in practice.
Posted by Rachel at 6:00 AM