Grains make up a large portion of our diets. In fact, the three main grain commodities - wheat, rice, maize - make up nearly 2/3 of the global human energy intake! These crops are essentially grasses that we've cultivated over thousands of years to produce larger, edible fruits - the grains (composed of endosperm, germ, and bran). Some 12,000 years ago the first of the cereal crops, namely emmer, wheat and barley, were domesticated in the Fertile Crescent (yup, that region of all the Middle East unrest).

But there are other cereals that are now staples in certain regions. Sorghum and millet are staple (gluten-free!) grains of Asia and Africa. Quinoa is a pseudo-cereal grown in the Andes. Our focus today, though, is amaranth, another pseudo-cereal originally from South America and now prevalent in Africa.

Cultivation of amaranth began around 8,000 years ago by the ancient Aztecs. In fact, the dates of 7 - 26 December comprise the Aztec month dedicated to the hummingbird god Huitzilopochtli and celebrated with a wide uses of amaranth. The grain was revered for its nourishing and energizing qualities, but fell out of use when Europeans invaded the content. There are approximately 60 known varieties, however, they are often considered to be weeds. Even so, it is high in protein, fiber, amino acids, calcium, and iron! Anywho, amaranth has a long and interesting history, in addition to its currently lauded status of being a gluten-free grain. 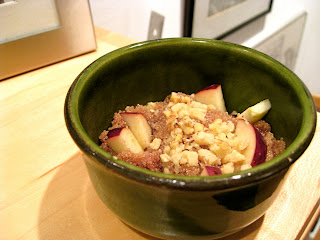 1. Bring liquid to boil in a small saucepan. Add amaranth. Cook for about 20 minutes until grains soften (should be similar to quinoa).
2. Add stevia and cinnamon. Stir and then top with chopped apple and walnuts (or other nuts...pecans would be lovely) for a hearty breakfast...or even dessert!

And visit Wellness Weekends for some other health gluten-free, vegan recipes!
Posted by Rachel at 7:00 AM