No, not that kind of cat! The term refers to rich, greedy and politically motivated individuals. I might soften it to make it more widely applicable to one of the failings of a capitalistic culture (is this going to very soap-boxy...?). You might be asking yourself now why we're talking about cats and capitalism.

Well, recently I was perusing this infographic on Walmart. It was both funny and disturbing. The company brings in more revenue than the largest oil company and would have the 25th largest economy in the world if this represented GDP. Not only is the chain the largest retailer on the planet, it also holds the claim for highest grocery sales in the U.S. The article notes that despite Walmart's great successes, the founding family are very frugal in terms of charitable donations (compared to say Gates or Buffett).

You might have grasped that my opinion of Walmart is not very high. In fact, I have not set foot in one in many a year. So why are we talking about the behemoth of a retail chain. Well, as a business with such a huge market share and amount of leverage, the choices for product sourcing and corporate social responsibility have resounding implications. I wrote briefly on this in 2010, but I believe it bears a little more attention.

In terms of agriculture, Walmart has made commitments to source only Marine Stewardship Council certified seafood, double the sale of locally sourced U.S. produce specifically from small and medium scale farmers, and purchase only "sustainable" palm oil and beef products by 2015. Not to mention, there are numerous company-led agriculture initiatives in the States and developing countries. 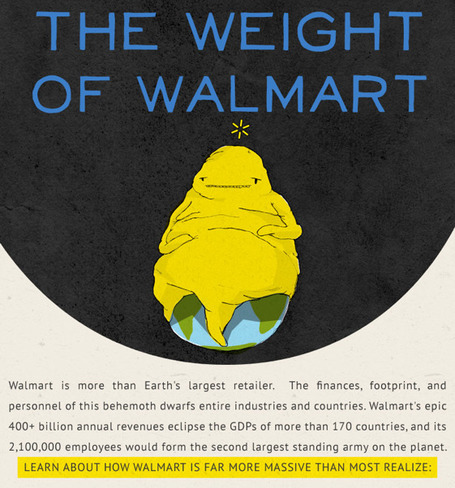 Great. If a major corporate entity takes steps to make their supply chain more responsible, this must be a big step in the right direction. With greater demand for "sustainable" food products, the actual adoption of better practices at larger scale makes it overall more economical. It also brings awareness to food purchasing decisions, among populations that may not have given much thought to where the fish or the cocoa came from. And if the Walmarts of the world require certain standards from their producers, they will get them!

At the same time, I get this visceral reaction when I think of Walmart and sustainability. Its first and foremost goal is to provide products to its customers at the cheapest price possible. Now I'm not saying that sustainable agriculture can't be lucrative, just that Walmart's business model does not account for the external costs or merely passes them on to its producers - demanding higher quality for the same low prices. There is also simply something unsettling about so much control being held by one company...

Ok, I admit it. I'm torn, conflicted, and don't think there is a really clear-cut this-is-good vs. this-is-bad conclusion. Enough preaching; feel free to voice your own thoughts!
Posted by Rachel at 10:00 AM