On Wednesday we made a quick leap back in time to the World War era and took a look at messages from the period that are still relevant to today's food system. But there is more to early 20th century food and agriculture than anti-waste propaganda (with the most positive of connotations implied by that word). In fact, post-Dust Bowl policies served as precursors for our present-day Farm Bill.

In 1933, the Agricultural Adjustment Act (AAA) provided price supports and subsidies to grow certain crops and keep pieces of land fallow, in order to raise the value of crops and avoid a surplus. Not only do we still have crop subsidies (particularly for corn), but this act set up U.S. agriculture in favor of big producers rather than small farms and sharecroppers. Surplus crops also factored into foreign food aid, which we will explore next week! 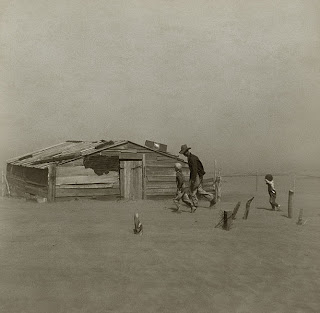 Finally, getting to the environmental side of things, legislation at this time was also responding heavily to Dust Bowl challenges. A product of severe drought, conversion of prairie land, and extensive cropping systems devoid of fallow periods or cover crops to replenish the soil, the "Dirty Thirties" were a period of severe hardship for rural communities in the central part of the country and those who depended on them. The Soil Conservation and Domestic Allotment Act addressed these land degradation issues and formed the early skeleton of conservation programs, such as the Conservation Reserve Program, administered by the US Department of Agriculture.

Ok, so perhaps this wasn't much of a "fast fact" for Friday, but it is terribly interesting!
Posted by Rachel at 6:00 AM