This week, let's focus on genetically modified organisms, or more commonly referred to as GMOs. Why? Well, this past Sunday, a march that began in New York on the first of the month ended with a rally in front of the White House. The Right to Know March focused on the lack of information around GMOs in our food supply and the American public's desire to know what we eat. 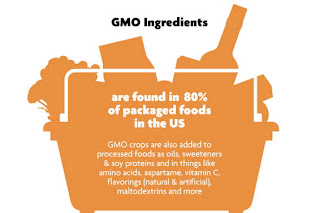 That is a fair concern, considering how many of the products on grocery shelves contain GMO ingredients. We've had big stories about round-up ready crops created superweeds and controversy over patent law cropping up in farmers' fields! Genetically engineered (GE) crops are quite a polarizing topic of conversation, particularly in countries in the European Union and other regions where labeling is required and many products banned entirely. However, I think the topic of GE crops is even more fascinating in the context of rural development and food security.

I have struggled with the concept that genetic engineering can play a crucial role in creating drought-tolerant crop varieties, improve nutritional content ("Golden Rice" is the classic example - enhanced with vitamin A to combat blindness), and feed a growing population. A couple of years ago the New York Times Room for Debate column took on this issue, with both sides of the spectrum weighing in. While the pros cited biotechnology as the way to combat climate change impacts and boost yields, harping on those who would write off these scientific feats, it seems as though very little evidence has shown the outstanding benefits resulting from GMOs. Raj Patel brings up the critical point that at present we produce enough food to feed the planet, but lack of access to these calories from poverty and poor infrastructure is ultimately at the root of hunger.

So after all this reading and musing, what are my thoughts on the topic? For me personally, the issue of GMOs is a no-brainer. I don't want to eat them. While there probably is more hype and hysteria than is merited, the fact remains that we are playing with something we don't fully understand.

As for feeding the world, I don't believe we need to go there. From an ecological perspective, engineering traits into our crops is not the same as boosting the natural systems that confers properties of adaptability and resilience. Building soil healthy, harboring pollinators, and ensuring the function of surrounding ecosystems is essential to a whole system with adaptive capacity. On the development side of things, many of the proposed GMO crops, as did the rice and wheat of the Green Revolution, require more inputs, more water, more seeds (since they often can't reproduce on their own)...for a poor African farmer, who knows if these added expenses and inability to save seed outweigh whatever engineered benefits they convey.

So, that was perhaps a bit longer and more rambling than intended, but hopefully it shed some light on the range of issues associated with genetically modified foodstuffs. I did not march on Sunday, but I do think that knowledge is power and we do need to increase awareness around the ubiquity of GMOs, both domestically and in our humanitarian aid and international development work!
Posted by Rachel at 11:00 AM