You may recall a post last year on Seattle restaurants. It needs updating, with new restaurants and those I've patronized since, but there was one I had yet to try - Hillside Quickies. Ok, I still have not been, but one of the locations recently become Sage Bakery and Cafe. This vegan spot on Capital Hill is a compact storefront with character to boot. 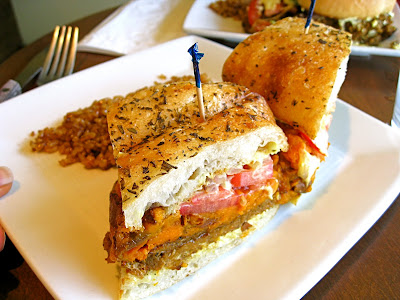 And the food is not so bad either! My mother and I split the Fire-Roasted Yam sandwich and the Mama Africa burger. Both were marvelous, but I liked the quinoa burger filling while my mother favored the sweet potato stacked on focaccia. While it's a bit pricy ($10 average sandwich price), it gets brownie points for serving up fare I would not normally make at home. As for that post-lunch chocolate craving...well, I would curb your sugar craving elsewhere unless desperation kicks in.

On that note, I will briefly mention the detour on my bike ride home from the late lunch. Flying Apron Bakery just opened its second location in downtown Redmond! This gluten-free, vegan, organic bakery offers fantastic peanut butter cookies, 50% off its day-old goodies, and an assortment of soups, sandwiches, and salads. It is hard to get gluten-free right, but Flying Apron does a pretty darn-good job (though, perhaps skip the cinnamon roll).

Email ThisBlogThis!Share to TwitterShare to FacebookShare to Pinterest
Labels: restaurants