Maize, Models, Megillah: Climate Impacts on Corn and a Holiday 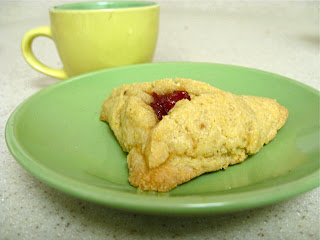 Shifting gears from tropical commodity crops to domestic staples, let’s talk a bit about corn. No, not the sweet corn on the cob we like to nibble at the dinner table. We are discussing the cereal grain, one of the big four: wheat, soy, rice, and maize. And the United States is by far the largest producer in the world, almost double the output of China (FAOStat 2008). One of the true natives to the Americas, corn enjoys a pervasiveness in our food system experienced by no other crop. It receives the greatest amount of subsidies (followed by wheat) and is found as an ingredient in almost any processed food – high fructose corn syrup, maltodextrin, you name it.

Despite its importance in our present food economy and feeding the world (particularly its livestock…), corn promises to be a crop hit hard by climate change. A new paper in Nature Climate Change (by a Stanford researcher, woot!) analyzes historical data to predict the impact of rising temperature and changes in precipitation on yield. With adequate water, plants experience a 1% decline in yields for every degree above 30C, and 1.7% under water stress at the same temperature (mid-90F and above). Also check out the coverage by The Economist.

While this paper examined data from Africa, the findings are indicative of the pending hurdles in production. Under current climate projections, African maize production will experience yield losses 65-100% of the time under 1C temperature increase. While this definitely does not bode well for Africa, another study at Cornell and the University of Tokyo indicate that for the U.S. and Chine, slightly less plentiful rainfalls might actually increase yields. I suppose only time will tell…

It also happened to be the Jewish holiday, Purim, this weekend. So I celebrated by making cornmeal Hamentashen! Really, that is all I did to celebrate ... no dressing up, no noise makers, no drinking excessively. Just recovering from a day of yoga training and baking vegan treats. 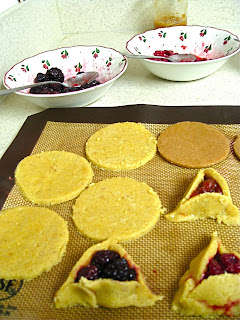 1. Pour water over flax seeds. Let sit for 5 minutes, then whisk with sugar and oil until emulsifies.

2. Add in dry ingredients and mix until well incorporated. Form a ball. Roll between two sheets of wax paper until about 1/4 inch thick. Use a tin can to cut out circles and transfer to a baking sheet with parchment paper or a baking mat.

3. Place a tablespoon of filling the center of each circle. Fold to create a triangle, pinching the corners of dough to seal.

4. Bake at 350F for 15 minutes. Allow to cool completely. Consume irresponsibly (considering we're celebrating a holiday on which one is supposed to get drunk)