Produce of the Week: Cauliflower 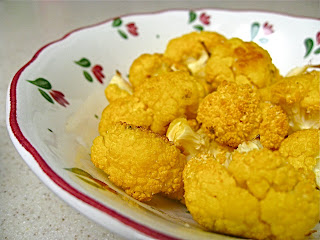 It has been quite an eventful weekend. Between the insane Rally to Restore Sanity, running club, and working the farmers market, there has been little time to veg (haha). However, between all the fun and games (and excessive chocolate eating/baking that we will discuss in upcoming blog entries), I managed to look into one of my favorite produce items.
Cauliflower, the brassica that stole my heart. Named for the latin terms cabbage and flower, cauliflower happens to be of the same species as broccoli, kale, and brussel sprouts. Cavofiore (same translation) is a Mediterranean veggie through and through, originating in Cyprus probably around the time of the Romans and settling very comfortably into Italian cuisine. Mid-16th century saw chouxfleur make its way in France, where it became quite a delicacy. By the early 19th century, the white heads of cabbage flowers had made it over to North America!
While a cold-weather crop (November 1st and chilly...), cauliflower is also extremely sensitive to weather conditions. It is hard to grow, which could be why it's not the cheapest veggie at the farm stand. That said, I am so much in love with this vegetable, I am willing to fork over the cash. So, what do I do with mon petit choux fleur?
As with most vegetables, I like to stick cauliflower - drizzled in a little olive oil and salt - in the oven on 375F for 30 minutes or so. But there are so many other wonderful uses for cauliflower:
101 Cookbooks presents a lovely sauteed simple cauliflower recipe.
Smitten Kitchen has a recipe for cauliflower, almonds, capers, and raisins.
Curried cauliflower and delicata squash...mmm.
Aloo gobi + peas from NY Times!
Cauliflower mashed is also fantastic.
Diet, Dessert, and Dogs has a really interesting Cauliflower Soup recipe.
And I have to say, I am exceedingly curious about these Cauliflower Cookies!
On a parting note, I wanted to let you all know that I am attempting to participate in Vegan MoFo 2010. This means that I will be attempting to post 5 times a week...eeps! I have some ideas, but beware that the posts may be slightly shorter and potentially less substantive than my usual posts (but collectively, they should be the same). Let me know if you have any requests or suggestions!

Email ThisBlogThis!Share to TwitterShare to FacebookShare to Pinterest
Labels: cauliflower, Produce of the Week