Produce of the Week: An Apple a Day

image courtesy of Telegraph UK
Happy Autumnal Equinox! If any fruit epitomizes the autumn season, the apple would be it. And there is such a spectrum: from sweet to tart and tangy, crunchy to soft (and often mealy). Apples have an interesting history and a distinctly American character. Which is why this fruit is making a second appearance on Produce of the Week.

But apples are not American in origin. One of the achievements to emerge from the fertile crescent, this fruit made its first appearance in Kazahkstan at the birth of agriculture around 10,000 years ago! In the earliest of human civilizations, from Chinese to Egyptian to Indus, apples played a role as sustenance and luxury. The importance of apples should not be undermined, or written off as the common lunchbox fruit of today.

Apples pervade history and literature: as the impetus of Adam and Eve's fall in the Garden of Eden; the fruit of love and temptation throughout Greek mythology; cameo appearance in the Odyssey. Their reputation spans the spectrum, from virtuous to corrupt, health food to dessert. A world traveler, the apple has diversified into over 7,500 varieties worldwide. The fruit itself carries the genetic material for vastly different offspring; grown from seed, such apples are good for little more than hard cider (thank you Johnny Appleseed)! The gamut of apples today stems from long-term breeding and grafting practices of orchardists. 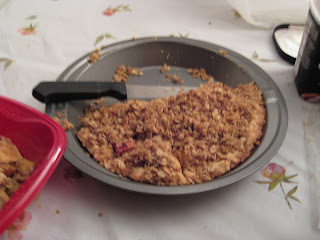 If ever asked about my favorite use for an apple, I would have to respond that nothing surpasses the joys of biting into a crisp and juicy piece of raw fruit. However, a close second would have to be a tasty apple crumble pie! If you don't want to go to the hassle (whatever, pies are easy) of making a full-fledged pie, try this individual-sized dessert I whipped up for this month's SOS Challenge. 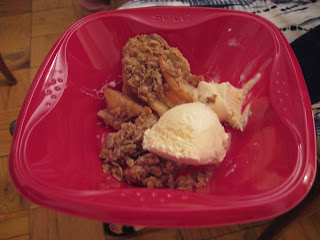 Crispy Apple Bake (a healthful twist on an apple crisp)

2 packets of sun crystals or powdered stevia to taste (the former is part real cane sugar, which caramelizes to provide a nice crispness)

1. Cut apple in half and remove seeds/core. Place on top of foil in a pan or baking sheet.

2. Combine all filling ingredients. Stuff into the apple halves.

4. Eat warm, as is or with some soy ice cream! (photo is actually of my apple crumble pie, but same idea, just no bottom crust!)

What else can you do with an apple? Possibilities are endless ... but my blog post isn't. So here are a few to try out:

And don't forget kids, "an apple a day keeps the doctor away"... so enjoy the wealth and variety of fruit this fall!

Email ThisBlogThis!Share to TwitterShare to FacebookShare to Pinterest
Labels: apples, Produce of the Week, SOS, Vegan

I love the simple approach to this dessert - apples are so good, they don't need a lot of doctoring! And you are a nerd for apple facts as much as I am it seems - hooray for food facts! I loved all your information. Thanks again for participating, you always have wonderful entries and I look forward to seeing what you come up with each month! xoxo Kim | http://www.affairsofliving.com

I love this dessert! And I'm so glad to see a dessert sweetened with stevia (which means no adjustments for me!). Thanks so much for this wonderful contribution to the SOS event! :D