Produce of the Week and the End of Summer

I honestly don't know where August went. Maybe to the invisible DC-housing monsters that haunt me on a daily basis? A 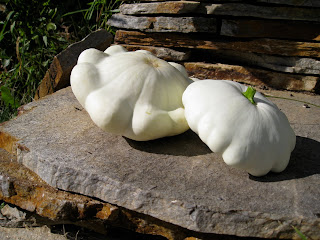 s such, I will plead lack of baking paraphernalia, cookware, and well, time, as my excuse for not posting or completing last month's Daring Baker's Challenge (which I will do someday). Despite still not having settled into a place of my own, I have managed to freeze away four gallon bags of sliced peaches. If anything, this was a successful hoarding of summer's bounty.
But peaches are not our produce of the week. Pattypan squash are a variety of summer squash (as is the traditional zucchini). Native to the Americas, squash has been consumed by humans for at least 7000 years. All falling under the same species, squash have a long history as part of Native Americans' diets - along with beans and corn. If you have ever been to a farmers market in late summer, you have probably witnessed the immense varieties. Squashes tend to be quite promiscuous, their flowers being openly pollinated by bees.
Most of the dishes I make with zucchini stem from the Italian tradition. Granted, Italy's warmer temperatures and sunny skies lend themselves better to growing zucchini than most other European countries. But there is so much more to do with zukes than sautee them with some tomatoes!
Ok, here is what I uncovered (and have yet to try):
Heidi of 101 cookbooks has a slew of recipes - most of them are very un-vegan, but I liked the sound of the Vegetable Cianfotta, the Spinach and Zucchini Soup, and a Chickpea StirFry.
NY Times made my day with a Summar Farro Salad and a Zucchini Panzanella Salad.
I also really like zucchini taking an Indian twist. So, Honey and Spice's Curry recipe caught my attention. You can also just sautee up some zucchini with mustard seeds, curry powder, and onions.
Finally, Sweet Beet and Green Bean has an awesome recipe for a gluten-free, vegan zucchini pizza! Or, you can check out my concoction I brought to work:
Scrumptious Zucchini Bread
1 large patty-pan squash (about 3 cups grated)
1 1/3 -1/2 cup turbinado sugar
2 tsp cinnamon
1 tbs starch
1 1/3 cup flour
½ cup corn meal
¼ cup oil
½ cup almond milk
2 tsps baking powder
½ tsp salt
(optional) heaping handfuls of chocolate chips
1. Whisk together sugar, oil, and milk. Incorporate zucchini fluff.
2. Add in all dry ingredients and mix until just combined.
3. Throw in some chocolate chips, if you want.
4. Split between two loaf pans (or 4 small) that are oiled and floured. Bake at 350F for 35-45 minutes, until a knife comes out clean. It will be moist, but that's what is so wonderful!
Next post (hopefully soon): The Meat of the Issue, followed by some apples.
Posted by Rachel at 9:31 PM

Email ThisBlogThis!Share to TwitterShare to FacebookShare to Pinterest
Labels: bread, Produce of the Week, Squash, zucchini