For the past year I have been waiting with bated breath. From tall, dark, and slender to fair-skinned and rotund, variety abounds. Some people stick up their noses and others relish and savor. And though you may find this dashing heart-breaker (and you know it is) in cuisines from around the globe, this nightshade (a cousin to tomatoes and potatoes) finds its origins in India or thereabouts.
No, all you ladies out there hoping for a sappy romance, I am just speaking of my infatuation with eggplant. Crazy enough, this guy is actually a berry! Bitter and spongy, both texture and flavor of the eggplant improves considerably with (quite) a bit of cooking. And why am I so excited? As heat-loving flora, eggplants require long periods of sunshine and hot days. It is quite a treat when August and September roll around with the bulk of the crop!
So while Solanum melongena has made its rounds on the kitchen table for a good 4,000 years, it slowly worked its way into the Arabic world (9th century), Spain (as early as 4th century), and Northern Europe (13th century). Over the course of this world tour (if you count the eventual migration to the New World), aubergine has become a star player in man culinary traditions. For a nifty time-line of Eggplant's stardom, visit this random page (wow, that was eloquent). 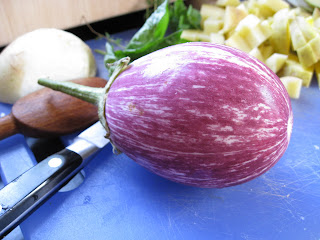 Ok, so what does one do with an eggplant? Well it really depends on the type and your own mood! I'm still gobbling up a rustic stew/ratatouille dish with potato, eggplant, tomato, and fresh basil, thyme, and oregano. Heidi at 101cookbooks has a version of my throw-together meal with a few extra ingredients.
Smitten Kitchen has some tasty options, with a grilled eggplant pizza and a tart take on Ratatouille's ratatouille. If we are sticking to more of the Mediterranean theme, stuffing your fatty eggplants with some couscous is not a half bad idea!
If you happen to obtain an Asian eggplant - Chinese and Japanese come in a long skinny style - then you will want to stick with those flavors. Also, make sure you cook these puppies until they are closing to falling apart! Miso Eggplant, go Indian-style, or just stir-fry a bunch of veggies up with some soy sauce. Honestly, just visit FatFreeVeganKitchen and you have it made!
Obviously the sky is the limit, but if you are pressed for time and don't want to try something too crazy, a simple pasta dish is always nice. Roasted eggplant also makes a nice dip (baba ganoush, anyone? Alas, if only I had time to cook more!
A few photos coming soon to a blog (namely this one) near you!
Posted by Rachel at 7:41 AM

Email ThisBlogThis!Share to TwitterShare to FacebookShare to Pinterest
Labels: eggplant, Produce of the Week

1. eggplant is a berry? CRAZY
2. Baba Ganoush is delish! Very easy if you have a gas stove
3. I miss you!