Produce of the Week: Kohlrabi 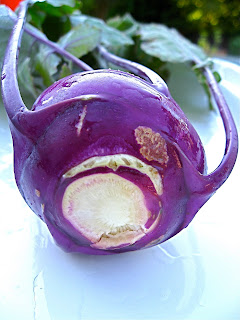 It's not a turnip; it's not a rutabaga; it's not a cabbage. But this lil' brassica falls into the same genus and is actually the same species as broccoli, kale, and brussel sprouts! Kohlrabi cultivars originated in Europe prior to the 16th century, although its early history remains a bit of a mystery. The name itself means "cabbage turnip" in German, an appropriate description. It looks somewhat like a turnip, with a similar texture and a milder, slightly sweet flavor. Probably my new favorite salad veggie, the root is very versatile raw, roasted, or sauteed.
Despite its humble beginnings in Europe, kohlrabi experiences its greatest popularity in Kashmir (in which it arrived during the 16th century). It still enjoys its own niche following in the United States, and as an easy-to-grow, cool-climate crop, it is no wonder I find it regularly present now at the farmers market. High in dietary fiber, vitamins A and C, and Potassium this is one superfood!
But does one do with Kohlrabi? Honestly, my favorite use by far is thinly slicing this beauty and adding it to a nice green salad! Sautéing or roasting is also an option, and I've been told that using a mandolin to VERY thinly slice it and adding a little salt and olive oil is the way to go!
Other fun and exciting uses for kohlrabi:
Indian-Style Kohlrabi Rosti
Tasty Kohlrabi Puree
Kohlrabi Empanadas - Wow!
Raw Kohlrabi Slaw
And someday I'll come up with a crazy kohlrabi cake... Kohlrabi Monster!!! Ok, they're not that scary...
Other Resources:
http://www.vegparadise.com/highestperch24.html
http://aggie-horticulture.tamu.edu/archives/parsons/publications/vegetabletravelers/kohlrabi.html
Posted by Rachel at 2:46 PM

Email ThisBlogThis!Share to TwitterShare to FacebookShare to Pinterest
Labels: kohlrabi, Produce of the Week