Produce of the Week: Spring is Here!

Well, technically, the first day of spring is on Sunday. But here in the Pacific Northwest the weather has been acting like spring since the New Year. Well, the farmer's market has finally caught up and I purchased a most exciting green from Nash's Organic Produce this week. Usually, they are my source for staple roots like rutabagas, turnips, beets, and some times cabbage. But, this Saturday they had something new and exciting: Lacinato Rabe!
You may be thinking, "ha, you mean broccoli rabe, right?" Actually, I am completely serious. While broccoli rabe, rapini, broccolini, or whatever else you want to call it is remarkably similar (technically even the same species), it is NOT the same as lacinato rabe. A rabe is more generally the flowering shoots of overwintered brassicas that show up usually around March. It is quite the treat before the burst of asparagus hits in early May, and so marks the beginning of spring in my book. My delicacy this week was of the lacinato kale variety! 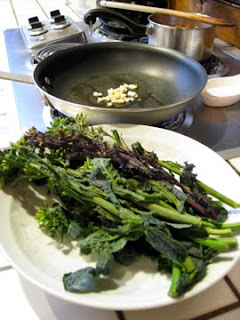 So what does one do with lacinato rabe? Lightly braising this beauty seems to be the most popular preparation method out there. I consulted Crescent Dragonwagon's Passionate Vegetarian for the low-down on using rabes (in her case, broccoli rabe), and ended up with a delicious garlicky dish:
1 tbs olive oil
1 clove garlic, minced
1 bunch rabe of some sort
salt to taste
1. Heat the oil over medium. Add the garlic and cook until fragrant, right before beginning to brown.
2. Add the washed rabe, tossing lightly in the oil and garlic. Place lid on top.
3. Cooking for 10-15 minutes until tender but not mushy. Stir occasionally to make sure it's not burning. Add a few tablespoons of water if all the liquid has evaporated.
4. Serve immediately! 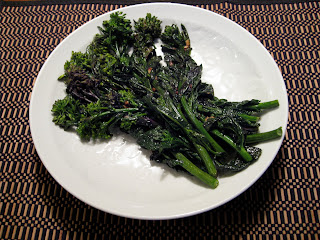 Lacinato rabe with black bean sauce is also a hit among several blogs. You might draw inspiration from other recipes with broccoli rabe as their star - NY Times has a risotto recipe (sub veggie for chicken stock and leave out the cheese) and Mark Bittman has his own ode to Broccoli Rabe. Smitten Kitchen's Broccoli Rabe Pizza looks fantastic if you want to take the non-vegan route.
As for myself, I am a fan of a simple sauté with some lemon juice. Overall, I was actually more taken with the kale variety than the broccolini, because of the hint of delicate kale leaves left to balance the fruiting bodies. This will definitely be on my shopping list next week!
Other Resources on Rabes:
http://mixedgreensblog.com/2008/04/21/seasons-eatings/getting-down-to-the-brassicas/
http://www.seedambassadors.org/Mainpages/still/napuskale/napuskale.htm
Posted by Rachel at 11:58 PM

Email ThisBlogThis!Share to TwitterShare to FacebookShare to Pinterest
Labels: Kale, Produce of the Week, Rabe