A Holiday to be Thankful For... 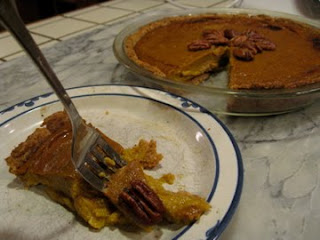 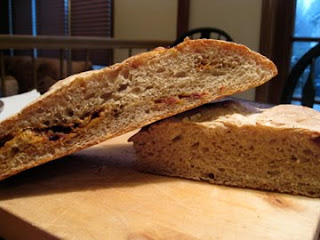 Sundried tomato onion bread (top) and roasted garlic bread! Mmm.
More on my menu: Oven-roasted sweet potato wedges and spinach salad with pears and candied pecans.
Thanksgiving of 1999, now a distant ten years ago, stands as my strongest recollection of first being vegetarian. Perhaps because the grocery stores and the media play up the importance of turkeys and hams, gravies and stuffings, I lost any connection I had with that holiday and have remained estranged until very recently.
The holiday that traditionally celebrates the mythical breaking of bread between the Native Americans and the Pilgrims in the early 17th century, never held much significance in my family. Occasionally we would partake in a friend's feast (where I would pray for something non-meaty I could eat), but usually we would thank our lucky stars for a day off and eat a modest meal of semi-traditional fare (we keep kosher for the most part, so no hams on our table).
After five years of college Thanksgivings - which included Chinese food in San Francisco, Indian take-away in Sydney, Australia, and a few larger gatherings with a friend's family - I think I am finally beginning to understand the true beauty of the Thanksgiving holiday. It is most assuredly not about stuffing yourself to the brim; the Pilgrims themselves were on the brink of starvation, not to mention the millions of hungry around the world in modern times.
Thanksgiving is the quintessential American harvest holiday. It celebrates the bounty of what is in season and plentiful during the late fall, and should reflect the land and the culture of wherever it is observed. Winter squashes, like pumpkins, cranberries in the northern states, and corn all experience their heyday during the mid- to late-fall. That is when their fruits are plentiful, their flavor bursts, and the fields are about ready to transition to their winter occupation. The time is right - to be thankful for the gifts of the earth and the delicacies of the season.
But, we seem to forget this and often emphasize the shopping, the football, or even just the expanse of the meal, over the thankful part. What I had not truly come to grips with until now is how Thanksgiving, out of all our holiday (maybe save Independence Day), is truly and American holiday. It celebrates our values of family and appreciation, and rejoices in the products our country has to offer at this time of the year, right before the harsh winter would normally push a family's survival skills. It is a time for each person to take a moment and consider what he/she has, and to really appreciate the good in his/her life (not to mention the amazing produce available at this time of year). Now, this is my kind of holiday!
Posted by Rachel at 2:59 AM